Day 122 of Putin's 'BLITZKRIEG' of Ukraine 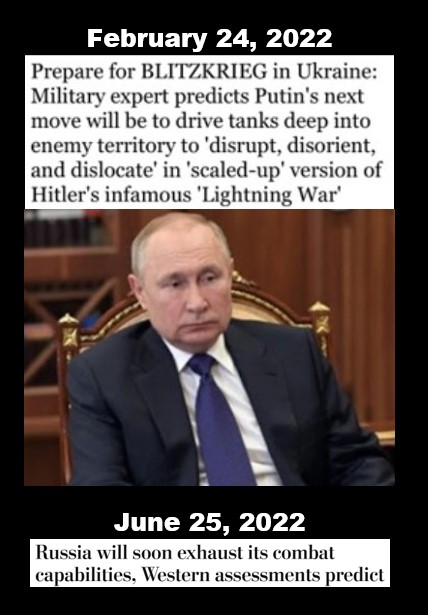 “There will come a time when the tiny advances Russia is making become unsustainable in light of the costs and they will need a significant pause to regenerate capability,” said a senior Western official, speaking on the condition of anonymity to discuss a sensitive issue.

The assessments come despite continued Russian advances against outgunned Ukrainian forces, including the capture on Friday of the city of Severodonetsk, the biggest urban center taken by Russia in the east since launching the latest Donbas offensive nearly three months ago. 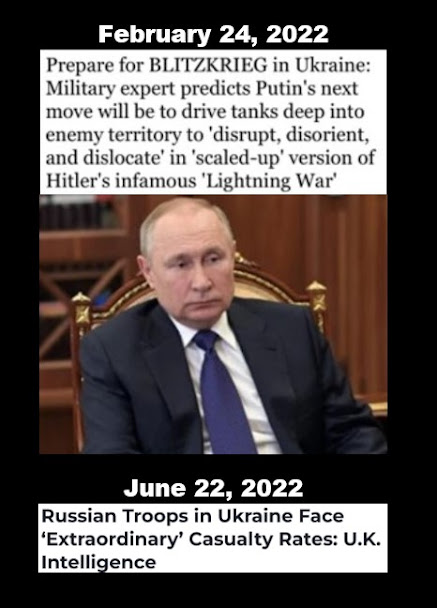 Figures published last week by the Donetsk People’s Republic, part of the pro-Putin self-declared autonomous region in eastern Ukraine known as the Donbas, claimed that more than 2,100 of its forces had died since operations began and nearly 9,000 had been wounded.

The casualty rate equals roughly 55% of its total force, according to the U.K. Ministry of Defense, “which highlights the extraordinary attrition rate Russian and pro-Russian forces are suffering in the Donbas.” 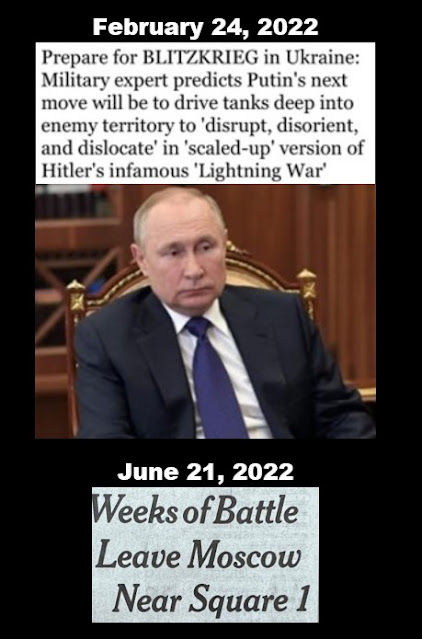 When Russia shifted its military campaign to focus on eastern Ukraine this spring, senior officials in the Biden administration said the next four to six weeks of fighting would determine the war’s eventual path.

That time has passed, and officials say the picture is increasingly clear: Russia is likely to end up with more territory, they said, but neither side will gain full control of the region as a depleted Russian military faces an opponent armed with increasingly sophisticated weapons.

While Russia has seized territory in the easternmost region of Luhansk, its progress has been plodding. Meanwhile, the arrival of American long-range artillery systems, and Ukrainians trained on how to use them, should help Ukraine in the battles to come, said Gen. Mark A. Milley, the chairman of the Joint Chiefs of Staff. 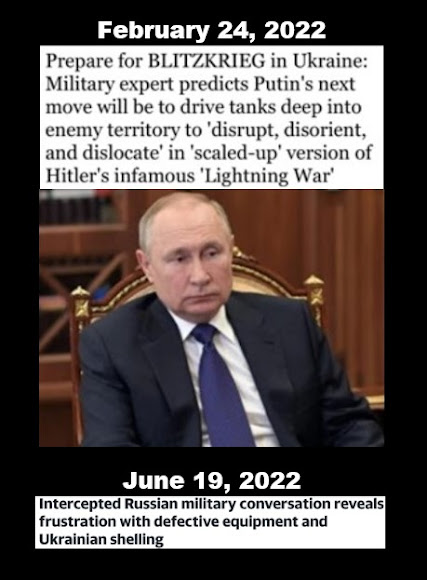 One of the invaders can be heard saying that he came under heavy fire from the Ukrainian Armed Forces at night and complained about the shortage of personnel.

"We have three people on duty here all day,” one of the speakers, presumably a Russian soldiers, said in the intercept.

“There's barely time to sleep. If only it were so that some would be here, others — there. As things stand, these three are on guard all night, and four — there. In the morning, as we went out, they started [pounding] us with AGS (automatic grenade systems). At first, they struck the field, then got closer and closer. Some ‘Transits’ were driving around. They did not just hit us, they also [pummeled] someone else there.”

Another participant in the conversation responded that a tank unit near them had also come under fire. 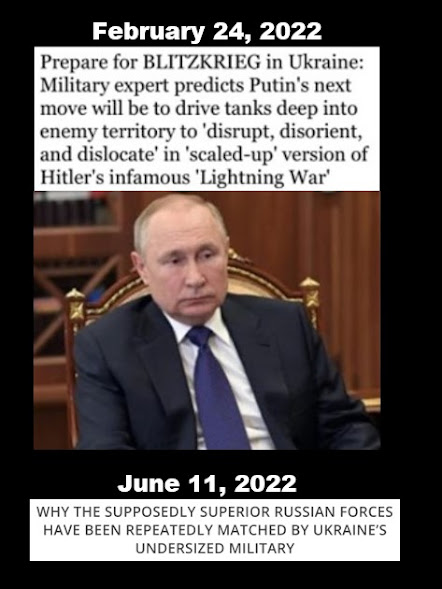 Because Russia has a US$62 billion defense budget and holds numerical advantages in weapon systemssuch as tanks, artillery, attack helicopters and planes, many analysts asked not whether Russia would win but rather how quickly it would do so.

What these observers and less experienced analysts are not taking into account is that wartime performance is influenced by more than how weapon systems function. Success in battle is also a function of strategy, operational employment, doctrine, training, leadership, culture and the will to fight.

Russia held and continues to hold an overwhelming numerical advantage in manpower and weapon systems, but

Ukraine holds the advantage in every other factor. Ukraine’s military competence goes a long way to explain why Russia failed to seize Kyiv and Kharkiv and why Russia’s attempts to seize the entirety of the Donetsk and Luhansk provinces in its latest offensive in the east will likely fail. 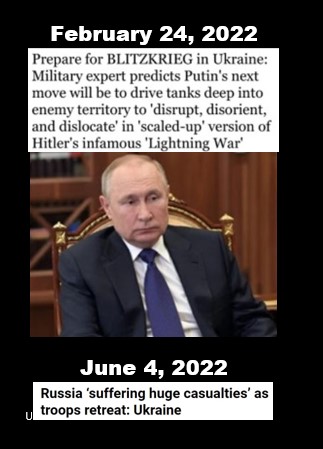 The Ukrainian forces reversed a Russian advance in Severodonetsk and recaptured about 20 percent of the strategic eastern city over the past couple of days, the governor of Luhansk province said. 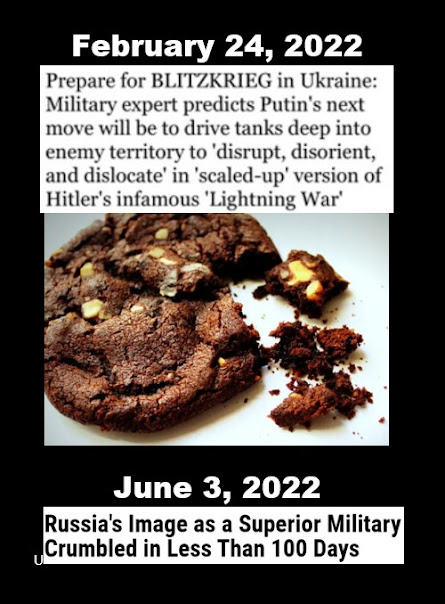 During his 20-plus years as leader, Putin has devoted vast amounts of resources into growing Russia's military into one of the largest and one of the most modern forces in the world. In the early days of the invasion, numerous media outlets reported on the vast technology of Russia's weapons, but little of that has been evident in Ukraine. 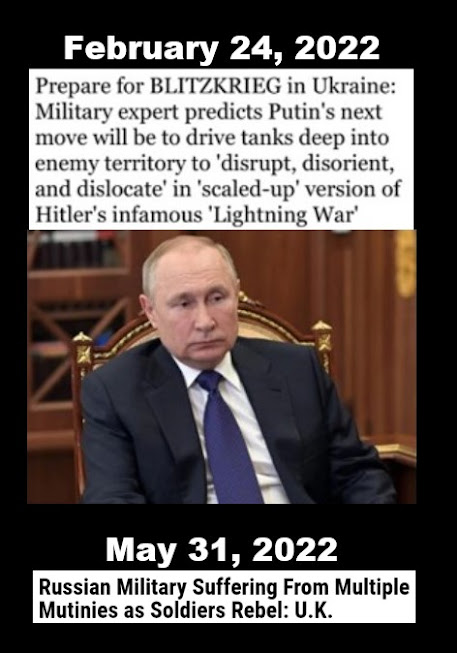 "With multiple credible reports of localized mutinies amongst Russia's forces in Ukraine, a lack of experienced and credible platoon and company commanders is likely to result to a further decrease in morale and continued or discipline," the post said in one of his bullet points.

The post went on to claim why Russia was struggling in the battle with its officers. 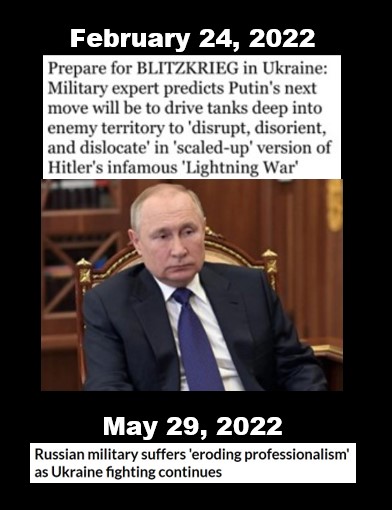 "Waning professionalism among Russia's officers could present Ukrainian forces with opportunities. Russian morale, already low, may drop further if such behavior is widespread and continues."

The analysis came as the Ukrainian Defense Ministry said in an operational update that its forces had repelled seven Russian attacks in the Donbas region in the past 24 hours. 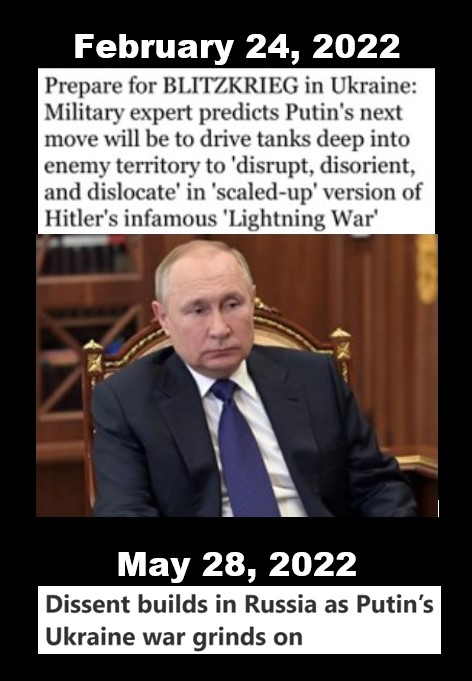 Putin’s early attempt to blitz Ukraine’s major cities failed, and the war has morphed into a protracted conflict that may have claimed the lives of as many Russian soldiers as the Soviet Union’s nine-year war in Afghanistan, Britain’s Defense Ministry said this week. Moscow has tried to downplay these losses, but the battlefield setbacks have raised questions.

Signs of resistance are growing. A Russian military court ruled behind closed doors this week that 115 National Guard service members were rightfully terminated for refusing to participate in the invasion. The decision can be appealed, according to the Russian news agency Interfax. 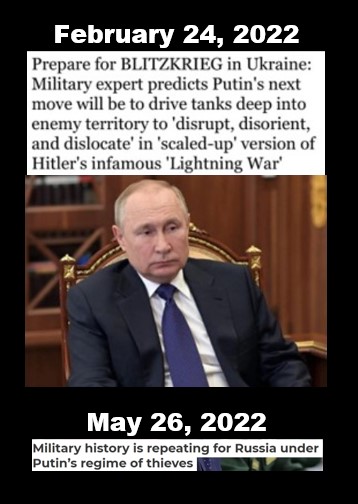 In explaining the reasons for Russia’s unexpected military weakness in Ukraine, few have expressed it better than The Economist. The magazine noted “the incurable inadequacy of despotic power” and “the cheating, bribery and peculation” that is “characteristic of the entire administration”.

Peculation means embezzlement. It’s a word rarely used nowadays; these words were in fact published by The Economist in October 1854, when Russia was in the process of losing the Crimean War.

But they might just easily be about Russia today, under Vladimir Putin, and the mess of its invasion of its far smaller neighbour. Rarely have the pernicious effects of authoritarianism and endemic corruption been so vividly on display.  [emphasis added] 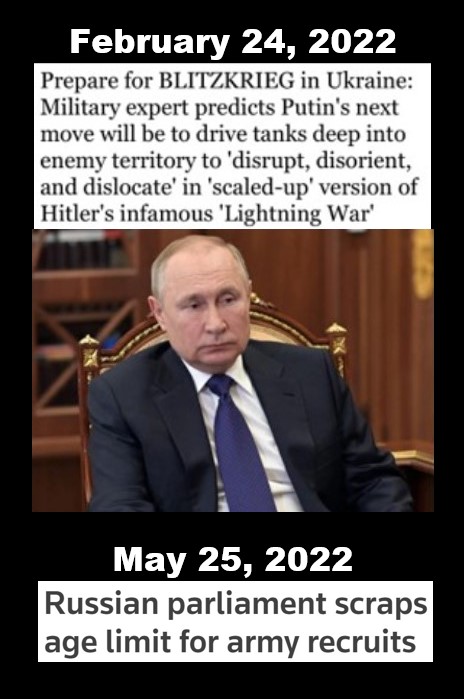 Currently, only Russians aged 18-40 and foreigners aged 18-30 can enlist as professional soldiers in the Russian military.

The defence ministry said on March 25 that 1,351 Russian service personnel had been killed and 3,825 wounded since Moscow sent its armed forces into Ukraine on Feb. 24. It has not updated its casualty figures since.

Both Ukrainian and Western intelligence officials have said Russia's losses in Ukraine were significantly higher at the time, and have risen sharply since March. 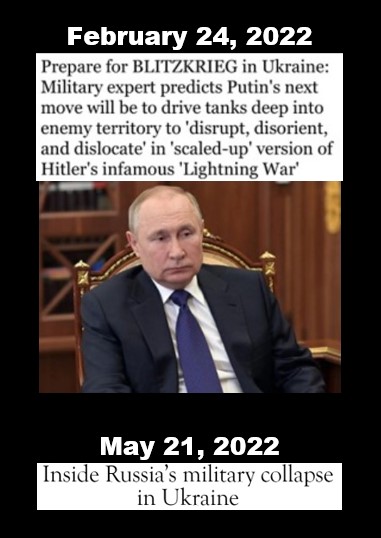 The Russian military has performed far worse in Ukraine than anyone could ever have predicted. After failing to take Kyiv, Russian troops have now been forced to focus on the Donbas region. Despite this greater concentration of forces, they are still struggling to make any major gains beyond the final capture of Mariupol, which had been under siege since the first days of the invasion without resupply or relief.\

For Vladimir Putin this represents a grand humiliation 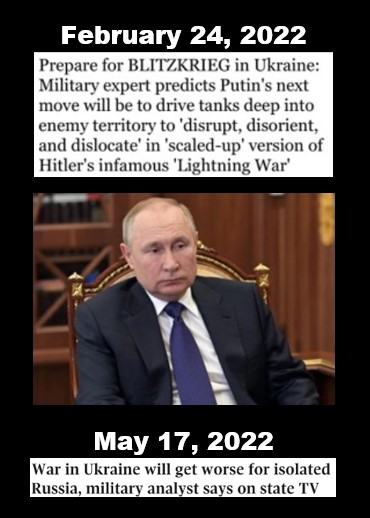 One military analyst had a brutally frank message for viewers of Russian state television: The war in Ukraine will get much worse for Russia, which is facing a mass mobilization supported by the United States while Russia is almost totally isolated.

Since President Vladimir Putin ordered the Feb. 24 invasion of Ukraine, Russia state media – and especially state television – have supported the Kremlin’s position. Few dissenting voices have been given air time.

That appeared to have changed on Monday night when one well-known military analyst gave a blunt assessment to Russia’s main state television channel of what Putin casts as the “special military operation”. 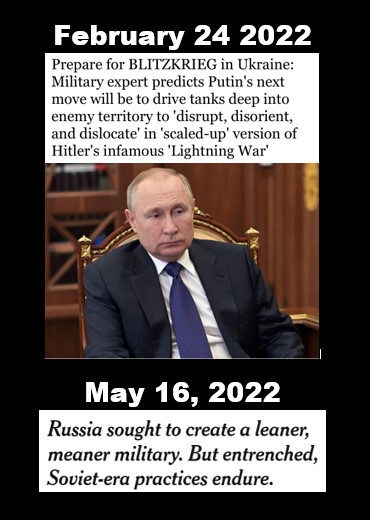 By any measure, despite capturing territory in the south and east, the Russian military has suffered a major blow in Ukraine. It has been forced to abandon what it expected would be a blitzkrieg to seize the entire country in a few days. Its forces were driven from around Kyiv, the capital. The flagship of its Black Sea fleet, the Moskva, was sunk; it has never controlled the skies; and by some Western estimates, tens of thousands of Russians have died.

81 days is well past the use-by date for 'great speed'.