Education Committee chair of Board of Regents of University of Wisconsin System has donated $10,400 to Scott Walker


And that's not all.

Half of the membership has contributed money to Scott Walker. 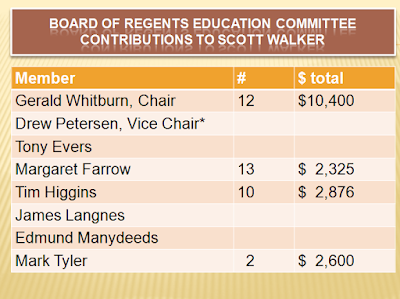 *Drew Petersen is listed as making 1 contribution of $1700 to Republican Mark Green.

Meet your UW System Board of Regents.


It's what the object of Whitburn's, Farrow's, Higgins' and Tyler's affections wants. A controversial set of policies governing tenure at University of Wisconsin System schools that critics say threaten academic freedom were endorsed without debate Friday by a Board of Regents committee.