UPDATE: What happens when you run your university like a business? (The Missouri edition)

Timothy Wolfe should never have been president of the University of Missouri. He was a computer-company executive with no advanced degrees or experience in academic administration. Like so many other unrepresentative, politically appointed boards, Missouri’s Board of Curators chose a private-sector manager to run a public university. Wolfe had virtually no experience with students or scholars. 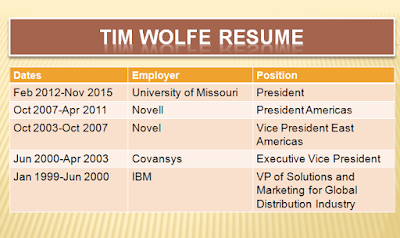 Wolfe had been under intense scrutiny and criticism since he refused to address protesters who blocked his car at the Homecoming Parade in October. Some Concerned Student 1950 members said they allowed Wolfe’s car to hit them as the driver attempted to get around the roadblock “to ensure we were heard.” Wolfe issued a statement Friday apologizing for not getting out of the car and engaging with protesters. He also acknowledged that systematic oppression exists on campus.

Not his first misstep.


Mr. Wolfe conceded missteps had been made early in the process of deciding what to do about the press. “

There’s more people that should have been brought into this conversation,” he said, like authors, other university publishers and the staff of the Missouri press.