Scott Walker opts for a nativist approach to immigration, ignores the realities at home 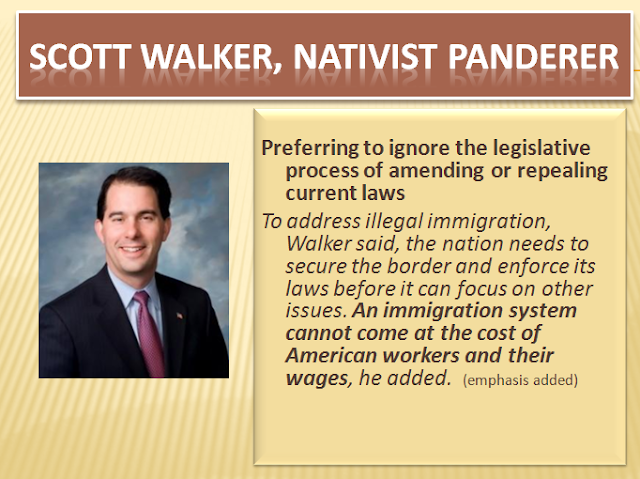 
"If immigrants are the ones who want to work, and they will show up and do the job, we need that. So many of us (farmers) have learned that there aren't enough willing workers," Mess said.

The dairy industry's growth went flat in the 1990s, at least partly because of a lack of hired help, according to Rosenow.

"Once we discovered immigrant labor, then the industry just took off," he said.

But now, with a shortage of immigrant workers and uncertainty around immigration law reform, growth at some farms has slowed.

Especially with a low unemployment rate, "it's just really hard to find local people" wanting to work on a dairy farm," Rosenow said.


Dairy farmers from Wisconsin and elsewhere descended on Washington recently to urge Congress and the president to take steps in immigration reform that will ensure a sufficient labor force for dairies.

“I felt it was important to attend because the immigration issue is so critical to our industry, and really to the entire country,” said Paul R. Fetzer of Fetzer Farms in Elmwood, Wis., a member of the board of directors for the Wisconsin-based Dairy Business Association.

Laurie Fischer, president of the American Dairy Coalition, which organized the fly-in event June 23-24, emphasized the critical nature of the issue.

“Dairy farmers need a new dairy labor policy to guarantee that they will have the available labor force they need to maintain and grow their businesses,” Fischer said.