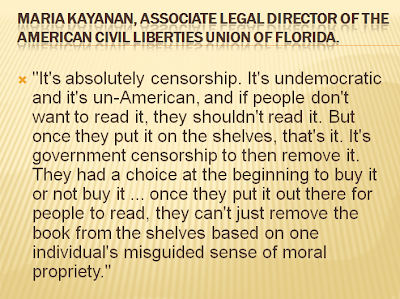 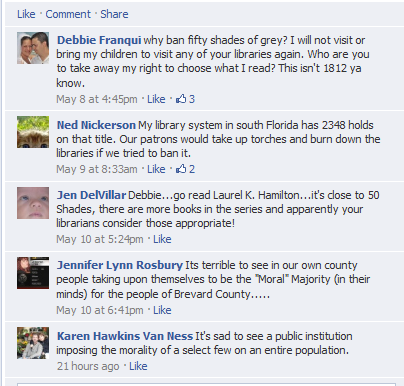 OK, readers advisory specialists, and anyone else who wishes to weigh in.  Is Jen providing a worthy suggestion?  I don't know Laurel K. Hamilton from Adam Hall.

I haven't read Fifty Shades but Hamilton's books, after about #8 in the Anita Blake series, and all of the Merry Gentry series, feature explicit sex, often with multiple partners simultaneously. They are categorized as urban fantasy and so have not received the attention that books blatantly labeled erotica do.

I have read neither series but James' books circ' well.

It seems to me that people are taking this way too far. Just because a library chooses to pull something from their shelves does not make it "government censorship"...the government didn't ban the book (and neither did the library)...the book was pulled for whatever reason, but it is still available for purchase in the US or wherever. I am absolutely sick of all these mommy-temper tantrums. Go buy it.