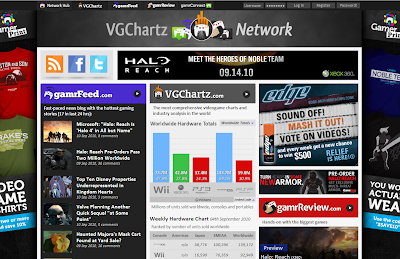 Adding to the gloom, Nintendo's Wii, the best selling of the current generation of game consoles, posted its worst sales month ever.

The overall sales numbers were "shockingly low," said Michael Pachter, a financial analyst who covers the game industry for Wedbush Securities. Total sales for last month were only $5 million higher than the industry posted in August 2006, Pachter noted.

He blamed the poor results on a variety of factors, including the lingering economic slowdown, relatively high prices for game consoles, increased time spent playing the free online multiplayer features of games such as "Call of Duty: Modern Warfare 2," and consumer fatigue with the Wii. And none of those factors is likely to change any time soon.

"I think we're kind of stuck with this the rest of the year," Pachter said.

U.S. retail sales of game hardware, software and accessories fell 10 percent from the same month last year to $818.9 million, market research firm NPD Group reported on Thursday. In the year-to-date, games sales have fallen 8 percent to $8.4 billion. That drop comes on top of last year's 8 percent full-year decline from the year before.
Posted by Retiring Guy at 8:10 AM