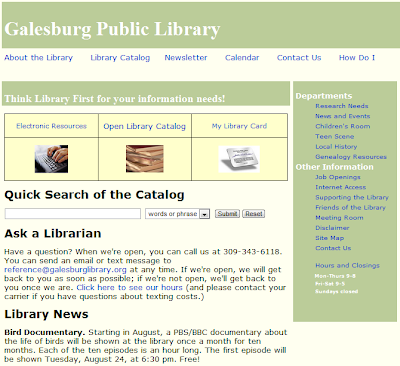 “We don’t have the money, but the other issue is we’re out of space,” Kroll said.

Library Director Pam Van Kirk said no money is spent on books without much thought.

“We’re weighing every purchase,” she said.

As technology use increases, the library is attempting to get by with aging computers.

“This past year, we had no money to buy new computers,” Kroll said, “and we won’t this year.”

Kroll said, in essence, there is one phone line at the library. Of the three actual lines, one is dedicated to the fax machine, one is for Van Kirk, leaving one for the public. Most calls have to be answered in circulation, where employees are trying to wait on patrons.
Posted by Retiring Guy at 8:17 PM

The situation is every bit as bad as it appears in this article. The Galesburg Public Library board has been exploring the construction of a new, much larger library building for years. We have not only outgrown our current building but it really is no longer suitable for the needs of a modern library. However the current national economy is booming compared to Galesburg and the prospects of raising the necessary funds to build a new library currently appear bleak. Add to that the need to convinced city officials to fully fund our bare bones operating budget and you can see that times are very tough despite a surge in patron usage of the library