UPDATE. Rising to the level of her incompetence: Cathy Stepp takes her Scott Walker-approved, chamber-of-commerce natural resources management act to the federal level 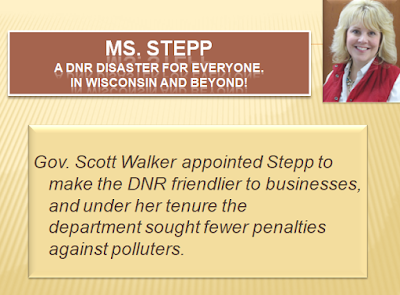 Reported in Cathy Stepp takes charge of EPA office that is pressuring her DNR.  (Madison.com, 12/24/2017) 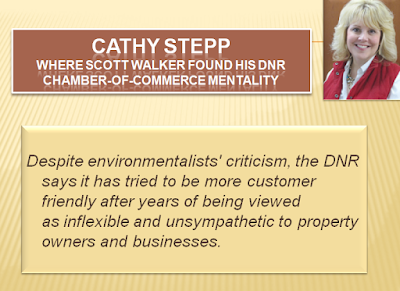 What's been goin' on of late:


6/5/2016 update, "Dear Rob, This is what happens when you run government like a business", starts here. 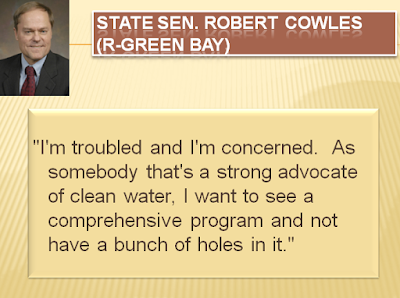 To his credit, Cowles was the only state senate Republicans to vote against 2015-17 budget bill.

Here's an example of Stepp's responsiveness and transparency -- before she was appointed to the position in 2010.

And in a post on a conservative blog last year, Stepp said the people who work at the DNR tend to be “anti-development, anti-transportation, and pro-garter snakes, karner blue butterflies, etc.” In the same post, she called agency employees “unelected bureaucrats” who tend to “come up with some pretty outrageous stuff that those of us in the real world have to contend with.” 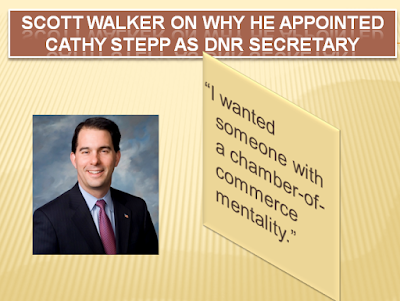 The 3/1/2016 Madison.com article explains why Kewaunee County resident Nancy Utesch was classified as a pest by DNR staff.


Utesch, an activist in Kewaunee County, said she was unable to prepare fully for a public hearing Thursday on a large dairy farm’s permit request because the DNR for months failed to respond to her request, first made last summer, for access to public records.


In other words, she was seeking information.  Bad, bad woman!

Never mind that one-third of wells in Kewaunee County are unfit for drinking due to high levels of E. coli, nitrates, and other pollutants caused by the runoff of 16 concentrated animal feeding operations (CAFOs).