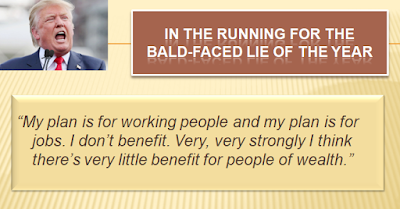 
Kansas passed a similar tax cut in 2012 and it almost broke the bank. The cuts had to be reversed as the state’s coffers dried up.

“Trump is carving out a special loophole for his own businesses and calling it a small-business tax cut,” said TJ Helmstetter of the group Americans For Tax Fairness.

The tax plan that the Trump administration outlined on Wednesday is a potentially huge windfall for the wealthiest Americans. It would not directly benefit the bottom third of the population. As for the middle class, the benefits appear to be modest.


Related reading:
'We are a cautionary tale': Kansas feels the pain of massive Trump-style tax cuts In 2012, Kansas did what Donald Trump wants to do: it introduced huge tax cuts to try to boost growth. Today, the state is out of money – and residents are angry.  (The Guardian, May 15, 2017)


The plan’s similarity to the one that has left Kansas in crisis is “unbelievable”, according to Duane Goossen, the former Kansas secretary of administration.

The economic spirit behind Trump’s plan is Arthur Laffer – the go-to guru of “supply-side economics” since the Reagan era, and one of the architects of Kansas governor Sam Brownback’s original tax plan.