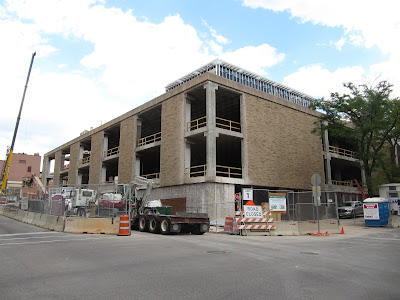 No, not in a metaphorical mood.
Progress pic taken Monday, July 9.

Excerpt: The city can raise property taxes up to $8.7 million under the state's new levy cap, which would mean a maximum 3.47 percent boost in taxes on the average $232,024 home.

That would leave a $10 million budget gap, and to cover it, Soglin wants agencies — including the police and fire departments — to draft budgets with 5 percent cuts, which if applied across the board could save perhaps $10 million or more.

Departmental budget requests are due August 6.

Hey, let me know if the Madison Public Library is not the upper-left, star performer -- just like in the movies -- when you read this post.
Posted by Retiring Guy at 7:54 PM