Sports as a Laboratory for New Media Technologies 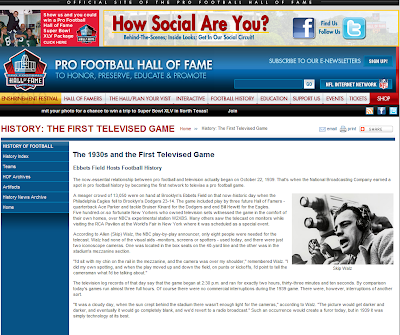 Excerpt: The concepts of 3-D television and live content streamed via broadband appeal deeply to small groups of believers. Much of the rest of the world is unsure that the future of entertainment lies in buying an expensive screen and wearing funny glasses, or hunching over one’s laptop instead of reclining on the couch. But if these products are the future, chances are that football fans will realize that before the rest of us do.

Sports have long served as a laboratory for new media technologies, and the viewing habits of sports fans often serve as an indicator of what will become mainstream. A study published by the Consumer Electronics Association in May [it'll cost your $699*] found that more than half of high-level sports fans described themselves as early technology adopters, and that these fans were more likely than others to be interested in 3-D TV, in watching live events on mobile devices and in paying to stream content online.

“The N.F.L. has a great audience for high technology,” said Pat McDonough, senior vice president for insights, analysis and policy at the Nielsen research company. “Sports in general and the N.F.L. in particular drive television purchases.”