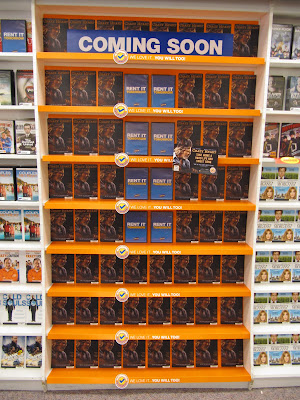 Excerpt:  Though its plans are not yet set in stone, people knowledgeable about the discussions said the Blockbuster representatives presented a mid-September bankruptcy as the most likely scenario. It would enter what is known as a “pre-planned bankruptcy,” meaning most but not all creditors would be on board ahead of time, including senior debt holders and content suppliers.
One of the primary goals of the bankruptcy process, which the company said it hopes would last about five months, would be to escape costly leases for some of its worst-performing stores. Though Blockbuster hasn’t decided exactly how many locations it would seek to shutter as part of a bankruptcy, executives told the major studios it is looking at between 500 and 800.

Blockbuster closed nearly 1,000 stores in the last year alone, a reflection of consumers’ rapidly declining interest in renting DVDs from retail locations now that they can rent them from ubiquitous kiosks in grocery stores, in the mail, or via the Internet.

Related article.
Just in case you don't think the video rental marketplace is changing.  (9/16/2009)
Posted by Retiring Guy at 6:55 AM