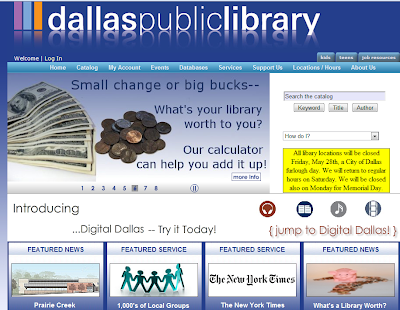 Link to May 29 Dallas News article, "Library budget cuts a sad story for all of Dallas".

Excerpt:    Once upon a time, the Dallas Public Library boasted a $32 million annual budget.

Those were the good old days.

Unfortunately, those days are long gone – siphoned off by a revenue drought that, once again, has the city dipping into every well it can find to fill a projected $130 million budget gap.

It's a familiar storyline, to be sure – one that's playing out in cities across the state and the nation.

But the Dallas library, once a sacred cow of sorts, is beginning to feel more like a sacrificial lamb in the city's numbers-crunching game.

The library's budget was cut to $28 million two years ago. Last year, the city tapped it for $6 million more in cuts.

This year, city officials are looking to drain up to $9 million from the library's bottom line, which would drop it to as low as $13 million next fiscal year.

Enough is enough, say some library protagonists, who are more than ready to throw the book at City Hall.