Stanford's football team defeated the University of Iowa 45-16 in the game. In addition, the Stanford band, which has a history of irreverent performances, poked fun during the halftime show with a dancing cow, a frowning farmer formation and other tongue-in-cheek gestures that upset some Iowans. ESPN, which televised the game, cut away from the band's performance.


Something of a sourpuss mug, too. 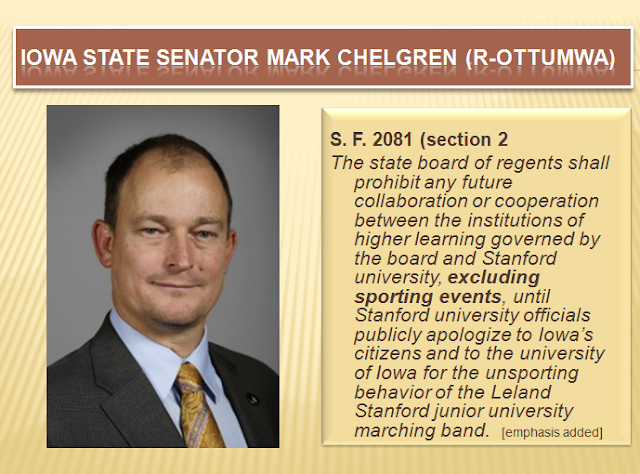 
Friday, January 1, 2016, was an embarrassingly ugly day for the Iowa Hawkeyes and, by extension, for the entire state.  The halftime score in this unexpectedly lopsided Rose Bowl match-up was 35-0.

So you can imagine that most Iowans were in no mood to be the butt of anyone's joke.

Had the situation been reversed, I suspect Iowans might have simply dismissed the Stanford band's halftime show as antic child's play.