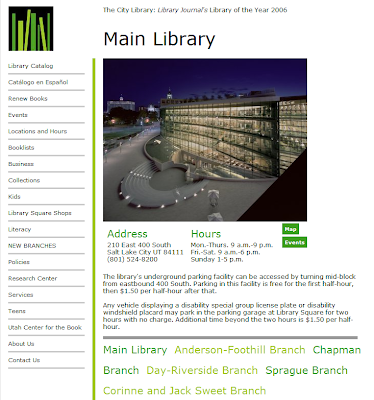 Excerpt: A sweeping management shake-up at the Salt Lake City Public Library — quietly in the works for months — has led to a series of demotions and retirements among veteran staffers in a move the director insists will improve efficiency.

But the overhaul, made official Wednesday, has led longtime employees to question Director Beth Elder’s leadership, while others remain afraid to speak out over fear of “retaliation.”

The reorganization follows the recommendations of a consultant, contracted by Elder and the Library Board earlier this year, whose report outlines a need for administrative changes.

The report was presented to the library’s board of directors this fall and has been a source of consternation both in the ranks of employees and in the library community ever since. The shuffle forced the 31 members of library management to reapply for their positions.
Posted by Retiring Guy at 7:34 AM