Link to July 11 San Jose Mercury News, "How our laws are really made".

Excerpt:  Imagine: At a time when California is lurching from crisis to crisis, a legislator has an idea to make life better. He puts together a bill, gathers support and shepherds it into law.

A lobbyist has an idea to make life better — but only for his client. The lobbyist writes the bill, shops for a willing lawmaker to introduce it and lines up the support. The legislator? He has to do little more than show up and vote.

This is the path of the "sponsored bill," a method of lawmaking little noticed outside California's capital but long favored on the inside. In many states lobbyists influence legislators; in California, they have — quite baldly — taken center stage in lawmaking.

Although lawmakers in recent years have routinely failed to grapple with health care, the state budget and other matters of public interest, they've managed to do the bidding of the private interests who tout sponsored bills at an impressive clip.

A Mercury News analysis found that in 2007-08, the most recent complete two-year legislative session, more than 1,800 bills — about 39 percent of the total — were sponsored by outside interests. And those sponsored bills made up 60 percent of the legislation that was passed into law.
How goes it in Wisconsin? 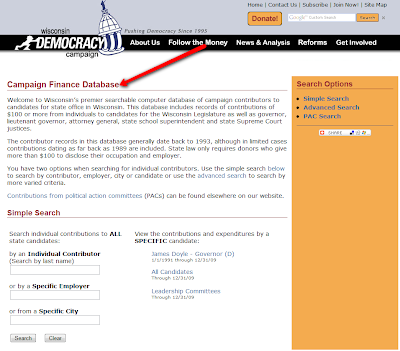 Link to Helping You Keep an Eye on Lobbying in Wisconsin.

Link to State of Wisconsin Government Accountability Board.

Link to Association of Wisconsin Lobbyists.
Posted by Retiring Guy at 7:09 AM