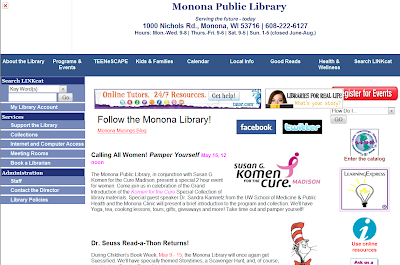 Excerpt: The Monona Public Library regrets to announce that Library Director Demita Gerber is on indefinite medical leave following emergency surgery for a brain aneurysm. Gerber was admitted to an area hospital on Monday, April 26, and underwent surgery the following day. She remains hospitalized in serious but stable condition. Her family anticipates a lengthy recovery.

Gerber was named Director of the Monona Public Library in 2006 and has overseen numerous improvements to library service. She was a driving force behind the recently completed ‘Booked for Life Endowment Fund Drive’ that raised $153,000 for the library’s future vitality. She has also worked closely with the staff and board to improve patron access to technology, establish new early literacy initiatives, launch online tutoring, and foster a new teen program. Library circulation under her leadership has reached record highs.

In anticipation of Gerber’s extended absence, Assistant Director Erick Plumb was appointed Acting Director by the Library Board at a special meeting on Friday, May 7. Plumb also joined the library staff in 2006, and was named Assistant Director in late 2008. “We’re obviously concerned for Demita’s health and her family’s well-being,” Plumb said. “Demita’s absence will be difficult for library staff as she provided outstanding leadership on a daily basis. But she has built a tremendous team over the last four years, and our patrons should continue to expect the same great service.”