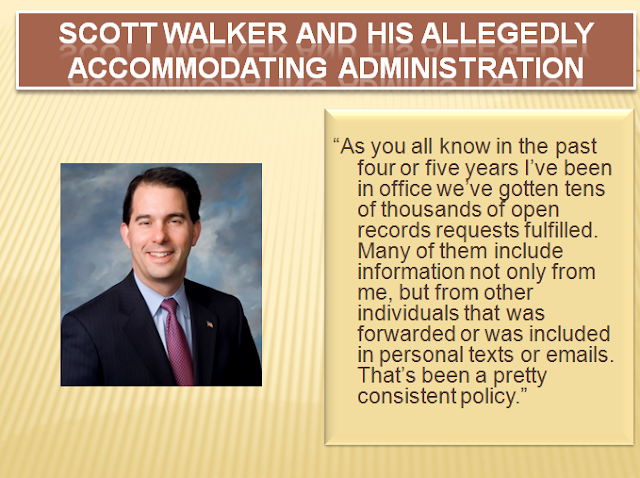 As quoted in Scott Walker says he saves all of his state business-related text messages.  (Wisconsin State Journal, 12/8/2015)

But, looking at the big picture, not necessarily fulfilled in a timely manner.


And it wasn't that long ago when this trio attempted to gut Wisconsin's open records law. 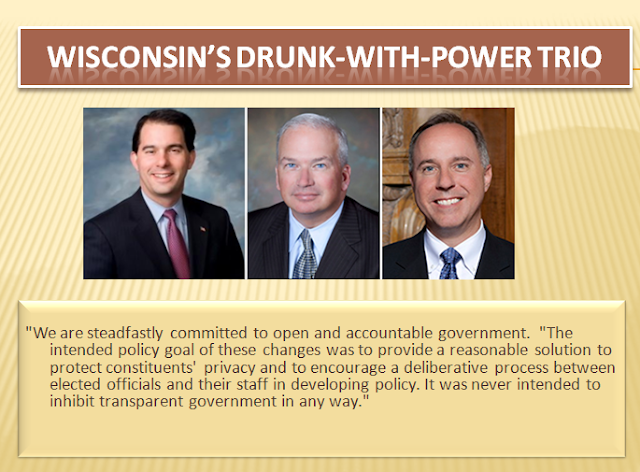 They're still having at it, hoping that we're not paying attention.


Casting the widest possible net.   At issue are so-called transitory records, which until the August action were defined under an overall state policy that said "routine requests for information that require no policy decision, special compilation or research are transitory to the sender and the recipient."
Now, a new definition expands on that description to include "emails to schedule or confirm meetings or events, committee agendas and minutes received by members on a distribution list, interim files, tracking and control files, recordings used for training purposes and ad hoc reports for individual use."

Ad hoc reports for individual use?  I can just imagine all the documents they'll stuff into this category.

Related posts:
Open records and Scott Walker's concerns with constituents' privacy.  (7/5/2015)
Scott Walker does David Bowie.  (7/4/2015)
Open records and Scott Walker's irresolute response.  (7/4/2015)
When it comes to transparency, ALEC wants to have it both ways.  (7/4/2015)
You have to wonder what dictionary Joint Finance co-chair John Nygren is working from.  (7/3/2015)
Assembly Speaker Robin Vos's definition of transparency: All the self-serving Republican news releases I see fit to print
Good question, Albert Darling. So why the lack of transparency in Wisconsin? (7/3/2015)
Posted by Retiring Guy at 6:30 AM