See her take to task this now falling star and former member of the Wisconsin State Assembly.

Kelly Westlund is the City Council Representative from Ward 11 in Ashland.

Biography.   Kelly moved to Ashland over 10 years ago. She and her husband, Caleb, have been renovating a house on the east end of Ashland for nearly five years. Kelly operates a private consulting business and has worked with various local farms, small businesses, state and local governments, and community organizations in a professional capacity to support regional economic and community development.

Excerpt:    Westlund acknowledged she’d like to run for state office some day, but she’s not going to challenge Sen. Bob Jauch, D-Poplar, or Rep. Janet Bewley, D-Ashland, both of whom she praised.
She appealed to delegates in her speech to reach out to rural voters and to get involved with local offices, arguing they are the training ground for those looking to move up.

Westlund said the Dem Party does a good job of reaching voters in Milwaukee and Madison, but needs to do a better job of reaching those in areas like hers. She said farmers, for example, are open to many of the messages that Dems have. But because they don’t hear them forcefully enough, they end up voting on other values that lead them to the GOP.

Westlund pointed to the mining bill that passed the Legislature earlier this year as a good example of where the party could do a better job of appealing to the farmers in her area who are now fearful of how the project will impact them.

“I get on my soap box and don’t shut my mouth,” Westlund said, adding the party would be well served by doing the same.

As you can see, the 7th Congressional District covers a lot of territory. 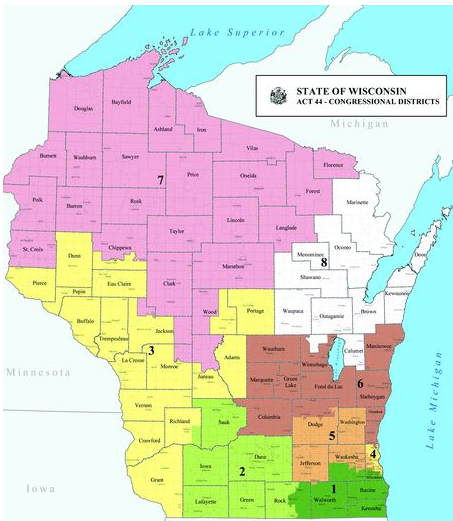 Why do most news stories pit the WI 7th district as a battleground target for the Democrats. A 56-43 margin is a monster to overcome even for a loud mouth dreamer as Kelly Westlund. Can you imagine her in a debate...and you thought Julie Lassa was bad at debates. My best guess is this will be a big money passer by the DNC and she will be on her own scrambling for thousands when Duffy is bringing the millions to the big show.