Summary of findings...with this most instructive bar graph. 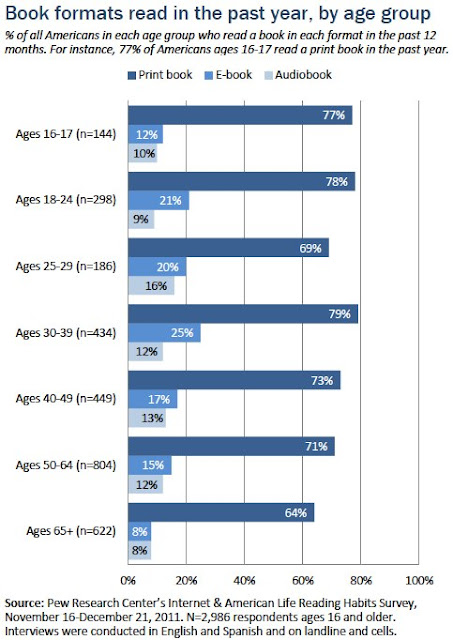 Excerpt from Pew Report.  [Emphasis added.]   More than eight in ten Americans between the ages of 16 and 29 read a book in the past year, and six in ten used their local public library. At the youngest end of the spectrum, high schoolers in their late teens (ages 16-17) and college-aged young adults (ages 18-24) are especially likely to have read a book or used the library in the past 12 months.

“Teens Today Don’t Read Books Anymore”: A Study of Differences in Interest and Comprehension Based on Reading Modalities: Part 1, Introduction and Methodology.  (Journal of Research on Libraries and Young Adults, 11/2/2010)

Excerpt:  [Emphasis added.]  Today’s teens may be reading just as much as teens in the past, but their methods and formats of reading are so different from the older generations now creating polls and studies that true levels of adolescent literacy leisure activities are not being captured.

Oh, really?  Based on the general information presented in Pew Research table at the top of this post, I don't see any dramatic differences.  Granted, 13 to 15 year olds aren't included in the Pew survey.

Another find from the Pew Report worth repeating.  (Emphasis added.]

Adults in their late twenties (ages 25-29) exhibit different patterns when compared with younger age groups. They are less likely to have read a book in the past year, and those who do read books are more likely to have purchased their most recent book. Yet, even as their reliance on their local public library dips, adults in their late twenties start to express a greater appreciation for libraries in general; almost three-quarters say that the library is important to them and their families.

Sidebar 2:  Libraries have ebooks??!!  Yesterday, I experience firsthand one of the main findings of the Pew Report.

Many of these young readers do not know they can borrow an e-book from a library, and a majority of them express the wish they could do so on pre-loaded e-readers.

WEMTA lobbyist Michael Blumenfeld and I met with Michael Brickman, Governor Walker's Education Policy Advisor, to discuss the current state of libraries, the 2013-15 biennial budget, and WLA's and WEMTA's legislative priorities.  When I provided him with a printed screenshot of Wisconsin's Digital Library, he was (a) surprised to learn that libraries lent ebooks and (b) eager to learn more about this service.
Posted by Retiring Guy at 11:06 AM