'Newsweek' on the Library Funding Crisis 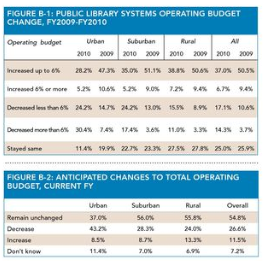 (Apologies for the fuzziness of the screenshot.)
Link to August 23 Newsweek article, "Closing the Books? Libraries across the U.S. are facing funding crises as they become the latest victims of the recession". (Thanks to my wife for this catch.)

Excerpt: In July, the Charlotte, N.C., library adopted a new budget that slashed nearly 30 percent of its funding and about 300 employees. In New York, libraries narrowly dodged an $82 million round of cuts thanks to public outcry earlier this year. The Milwaukee library system adopted austerity measures, only to find itself penalized for cutting too far. And the Free Library of Philadelphia only avoided a total shutdown through an act of the Pennsylvania State Senate.

A majority of the country’s library systems are having to make cuts, according to the American Library Association, and many of those cutbacks are quite devastating, even if the headline numbers aren’t as large. As cities and counties deal with the slow recovery, the budgets many of them adopted this summer for the 2011 fiscal year have placed large chunks of library funding on the block. For desperate officials, it’s a soft target, but librarians warn that cutting hours and positions might actually slow down the pace of recovery.

“Even back in the late 1970s inflationary times, I’ve never seen anything like this,” says Roberta Stevens, who’s on leave from a post at the Library of Congress to hold the presidency of the ALA. The stakes are high, she says: “We’re really talking about being not just a successful democracy but also in terms of global competitiveness. You don’t like to use these words, but they’ve always been about information literacy, and at this time, with such a wealth of information out there, you really need librarians to help you sort through what is out there.”

Basically a depressing rehash for regular readers of this blog about the ongoing cuts in funding for libraries.

Based on the information presented in the American Libraries Summer 2010 digital supplement, "Public Library Funding Landscape", urban libraries have been hit the hardest.  (Please note:  right now, apparently, every link at the AL website results in a "Page Could Not Be Loaded" error message.)
Posted by Retiring Guy at 2:02 PM