The Philadelphia Inquirer Editorial Board Weighs In on Ebooks and Libraries 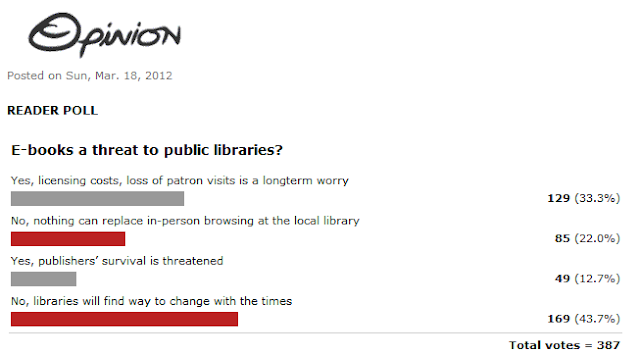 As with any online reader poll, to be taken with a grain of salt.

Theoretically, e-books can last forever, and they are so easily obtained on the Internet that publishers believe they could lose their chance to recoup the costs of the original risks they took on authors and production. Paper books sold to libraries eventually deteriorate after many uses and libraries must replace them. With e-books, they don’t.

The ease of downloading also means people don’t have to go to libraries for e-books, which raises questions about the future of libraries. They are more than just book warehouses. For example, the jobless go the library to hunt for employment on the Internet. Libraries help bridge the digital divide between those who have computers and those who don’t. Their programs for young children, teenagers, and adults promote literacy. And visits by popular authors to a public library are significant cultural events.

Librarians rightly argue that they are spending dwindling public resources on e-books, so they should get a break. Part of their job is to help build a literate society, which is essential to a strong democracy. They also make a strong case that libraries generate business for publishers.