Point/Counterpoint on Manufacturing: Panel on Wisconsin's Economic Future Barking Up the Wrong Tree?

POINT:  Wisconsin's future is manufacturing. Kleefisch, others speak on value of factories in state. (Sussex Sun, 10/25/2011)

Excerpt: Echoing the oft-heard slogan "Wisconsin is open for business," state business representatives noted that manufacturing is one of the state's great strengths.

But that very strength could pose a danger, as the state is especially vulnerable if manufacturing industries took a downturn.

Lt. Gov. Rebecca Kleefisch and representatives from various economic groups spoke to an audience of businesspeople about Wisconsin's economic future at a luncheon Oct. 19 at Country Springs Hotel in Pewaukee. The event also recognized the Wisconsin Manufacturers and Commerce's (WMC) 100th anniversary.

Kleefisch explained that as part of Gov. Scott Walker's goal to create 250,000 jobs in Wisconsin, she has spent many hours speaking with business owners statewide. She said that at the beginning of this summer, 88 percent of people thought that Wisconsin is moving in the right direction.  [added]

OK, time out.  This reminds me of a story from college.  It's Wednesday, November 8, 1972, and a friend and I are walking to Norton Union after class.  When we got to the topic of the Presidential election, Sue comments in a tone of sincere disbelief, "I can't believe McGovern lost.  Everyone I know voted for him."

I was so dumbfounded by this observation, I let her remark slide.

Of course, it was true: everyone we knew on the UB campus had voted for George McGovern, but there was no way I was going to extrapolate any national outcome from such a small, homogeneous sample.

And as for that 88%, maybe Kleefisch got her sources mixed up. Wisconsin has 88 percent more manufacturing concentration than the typical state, 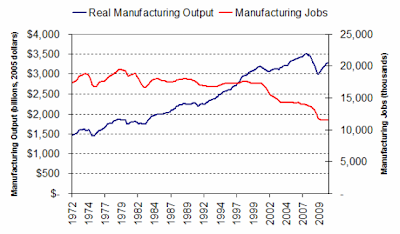 COUNTERPOINT: The Truth About the Great American Manufacturing Decline. (The Motley Fool, 2/5/2011)

Excerpt: We're making more things today than almost ever before. Even adjusted for inflation, manufacturing output is near an all-time high. In real terms, we're making more than twice as much today as we were in the early 1970s.

Why such a disconnect between perception and reality?

There's no arguing that manufacturing jobs have been tumbling for decades. Not only are they falling, but they're falling at an increasing pace. There were more than 19 million manufacturing jobs in 1980. Today, there are a little more than 11 million. Those numbers looks far worse adjusted for population growth. The decline in manufacturing employment is real. It's bad. And it's getting worse.

The author goes on to explain the impact of productivity on manufacturing employment, nicely encapsulated in this statement: Simply put, manufacturers have grown incredibly efficient over the past several decades. They're able to build the same amount of stuff with far fewer people.
Posted by Retiring Guy at 8:32 AM

It's interesting - This is partially how Andrew Carnegie amassed the fortune he did. Through efficiencies and ruthlessly tough labor negotiations. However he chose to give back to his communities since he saw his fortune as a product of the community.