EarlyWord's Buzzkill on Joshua Ferris's "The Unnamed" Confirmed in LINKcat 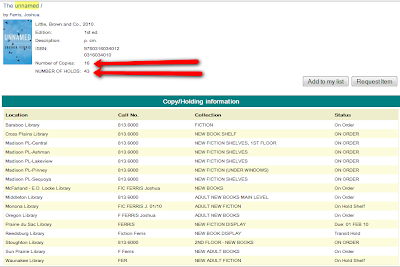 Excerpt: Of the titles going on sale this week, Joshua Ferris’s much-anticipated second novel, The Unnamed, has the most buzz. The tale of how a wealthy New York lawyer and his family cope with his mysterious illness is a # Indie Pick for January. 241 libraries have it, according to WorldCat, with modest holds on modest orders in the libraries we checked.

16 of 49 library locations have ordered copies. No duplicates have been ordered for any locations.

43 holds have been placed -- in a service-area population of about 700,000. Unimpressive when you look at the numbers of holds placed on New York Times fiction best sellers.
Posted by Retiring Guy at 5:37 PM