Parents Throughout St. Louis County (and Elsewhere, It Appears) Insulted Their Children in the Spring 2014 Elections

The 12%?  That was not an exaggeration. The historical and institutional trends that created the current dynamic in Ferguson – a largely African-American population led by a largely white local government – are complex, but the fact that black voters haven’t been politically engaged has contributed to the challenges facing the community. In the most recent elections, turnout really was just 12%.

Retiring Guy notes that it wasn't just Ferguson with the low voter turnout.   In the April 8, 2014, election -- the most recently available results posted on the St. Louis County website -- half of the first 26 communities on this list had a lower voter turnout percentage than Ferguson.

And this didn't happen only in communities with "a largely African-American population". 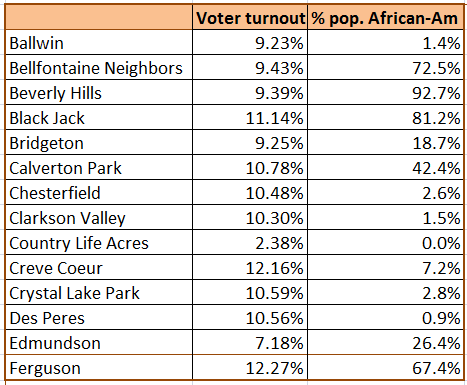 What about Ferguson's voter turnout percentage in the 2012 Presidential election, you might be wondering?

Taking a look in the mirror.  The statewide turnout in Wisconsin's most recent election -- the August primaries -- is estimated to be 10%.

No foolin'.   The Wisconsin Government Accountability Board is predicting voter turnout of 12 percent for the Spring Election on Tuesday, April 1.
Posted by Retiring Guy at 9:04 PM