The specifics: According to a press release from Mayville Police Department, the incidents involve one person entering a home through a front or back door. Authorities believe a second person waits nearby with a vehicle. In the one attempted burglary, the homeowner was home and surprised the burglar.

Authorities say that for the most part, the burglar has taken change and jewelry.

In Columbus, authorities say there have been six burglaries reported in the past two weeks, including three on Friday.

Columbus is located in Columbia County.

Making the connection. An increase in heroin use leads to an increase in burglaries, shoplifting and thefts, Richards said, because drug addicts are seeking things to sell to pay for their habit.

At the rate of increase of the use of heroin, nearly every person will be affected, either through the loss of a friend or family member, or by being a victim of burglary or theft.

Mayville is located in Dodge County.

Making the connection.  [Dodge County District Attorney Kurt] Klomberg said that while he prosecutes people for delivery or possession of the drug, many of the other crimes he's dealing with, such as robberies and burglaries, are often revolving around drug use.

"A heavy addiction can cost $250 a day for using heroin," he said.  "These people eventually turn to crime.  They sell the drug or commit burglaries.  We can do something about this.  We can rid our community of heroin."

One of the bills introduced by Nygren. 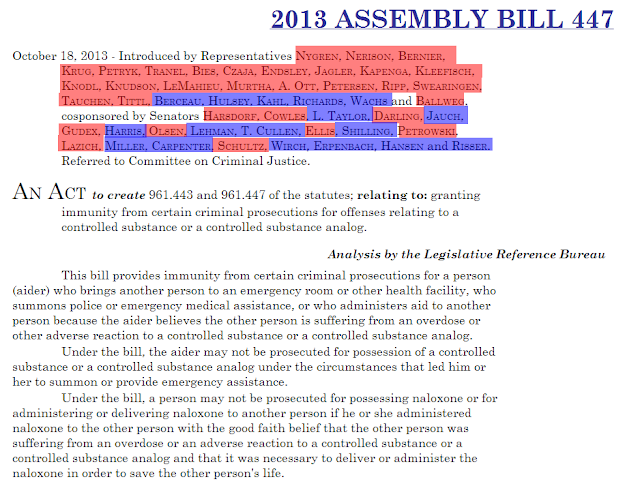