My first visit to the Appleton Public Library took place at this location, though not at the time this photo was taken.  Really!  It occurred in 1979, when I was Head of Extension Services at the Oshkosh Public Library, two years before the present facility on North Oneida Street opened.

From the "History of the Appleton Public Library, 1887-1997", which includes the following sections:

Nearly a decade before Appleton had a publicly-funded library, Elizabeth Jones spearheaded the first successful attempt at a community reading room in the fall of 1887. At her own expense, Jones rented rooms over Pardee's Store (near the corner of College Ave. & Morrison St.), provided some materials, and solicited donations of books, magazines, and newspapers. The room was an immediate success. Within months, the Young Men's Free Reading Room Association formed to continue the effort. The Jones family remained a driving force behind the library; 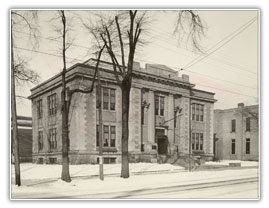 From MPL's "Library History" webpage.
During 1898 and 1899, a committee comprised of five members of the Clio Club, a women’s literacy group, raised $4,700 to establish a public library supported by public taxation. In November of 1899, the Manitowoc City Council adopted the gift from the Clio Club, provided a tax to support the library, and appointed the first Library Board of Trustees comprised of C. F. Canright, John Nagle and Norman Torrison.

Now home to the best pizza in town, if not in all of Dane County.  (Try the Calabrese, Misto, or Shrimp and Goat Cheese.) 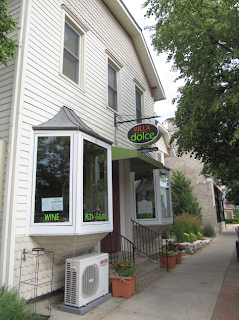 From "Historical Overview of the Middleton Public Library"
On February 27, 1927, the members of the Middleton Progressive Women’s Club start a library by donating a shelf’s worth of books, which are made available at the Burmeister-Kruse Department Store, located at the northwest corner of Hubbard and Parmenter.

From a speech that Kris Adams Wendt delivered to the Rhinelander Woman's Club in 2007.
The public library movement was quickly embraced by Women’s Clubs across the United States. The history of the Rhinelander Woman’s Club and the Rhinelander Public Library have become so intertwined that, 109 years later, Woman’s Club members are still fondly referenced as the library’s “founding mothers.” It is most fortunate that cord of communion and sustenance has never been cut. The Club’s first and greatest project has truly set its course through the decades.  [Emphasis added.]

I stand here this morning to give testimony to the tireless work of the amazing Rhinelander women who created, equipped and opened a public library in just three months time.

The twenty women who founded the Rhinelander Woman’s Club on Tuesday, January 11, 1898 were interested in study, fellowship and the public library.  The chapter was launched a scant three weeks following the inaugural meeting of the Rhinelander Free City Library Board on December 20, 1897.

At least three of the five women on the first library board were listed among the first Woman’s Club members. In the manner of our social convention, these ladies most often appeared in print behind their husband’s name and initials, in the manner of “Mrs. W.E. Brown” but I knew these charter members as Clara Brown, her sister-in-law Juliet Brown, Julia Barnes, Anna Hinman and….my mother…Bessie Van Tassel Wixson.

From "History of the Stoughton Public Library"
The Library Board asked Carnegie for $15,000, but he was reluctant to increase his standard grant from $10,000. After much correspondence about specific details, Carnegie reached a compromise of $13,000.

Ladies’ groups in town became avidly involved and the social scene boomed with one fundraising benefit after another, such as sponsoring 15 cent baked bean suppers, home talent plays, concerts by local musicians and whatever else might raise a few more dollars for the proposed library and its furnishings. 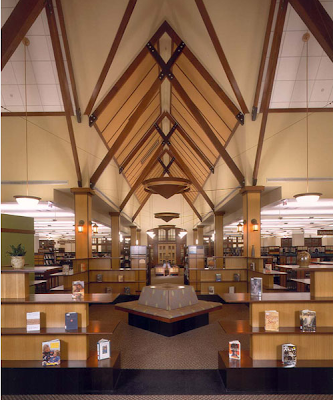 From "Origins 1901-1924"
The 20th Century Club, founded in 1901, was the follow-up to the Ladies Home Social Club that had already been operating a private library for over 20 years. Sarah Haner, born in the neighboring township of Bristol, founded the 20 th Century Club in order to promote causes such as temperance, equality, and literacy. 5 One of the first acts of the club was to promote the creation of a free public library in Sun Prairie. A committee was created to pursue this goal and their ideas for a library were sent to the WFLC. In reply, the WFLC suggested that the village council and president had to appoint the library board and provide separate funds for the library. The village council appointed a library board in April of 1901, but did not supply any funds for maintenance purposes, proposing instead that voluntary subscriptions would fund the  library.  However, the village council soon changed its mind later in 1901 and supplied a total of $50.00 dollars that same year.

History of the Sun Prairie Public Library (in 4 chapters)

Karyn Schmidt reports that Taylor Memorial Library in Taylor had a lot of books that were labeled “Taylor Legion Aux. Library”, so I thought we might fit this category. A 1938 newspaper article gives the “First annual report of the library at Taylor sponsored by the Auxiliary unit of the Carl Hanson Post of the American Legion." 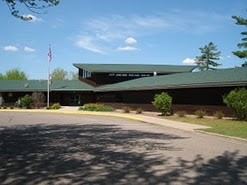 Shared by Library Director Mary Dunn.
The Tomahawk Public Library has been an integral part of the City of Tomahawk for over 100 years. In 1909 the Women's Literary Club and Tuesday Club sponsored the establishment of a library in the assembly room of the Tomahawk City Hall. In 1967 Mr. and Mrs. George Karam gifted funds to add a 2, 400 square foot library addition on to the City Hall. Children's services were provided separately on the second floor of the City Hall. In 1995 the Tomahawk Public Library moved into a beautiful 11, 600 square foot building along the shores of the Wisconsin River. The library continues to expand services to the Community of Tomahawk.

From a brief history of the library written in 1970 by Pearl S. Dopp, shared by Library Director Kent Barnard.
It was forty years ago that the Wild Rose Women’s Club and P.T.A. joined hands to establish a library in the village hall. It was in the winter of 1930, the depth of the depression, when no one had money to buy books or periodicals or amusement. The Village Board built book shelves and Mrs. Katherine Patterson, Rev. W.T. Williams and Mrs. George Dopp went from house to house collecting books to fill them.

Mrs. Anna Hoaglin was the first librarian and gave of herself and her time until her death in 1954. Rev. W.T. Williams was the first president, and on his death, Mrs. George Dopp became president.

Other trustees were Mrs. Frank Dopp and William Godson, who was superintendent of schools. Mr. Godson is retired and living in Marinette. He and Mrs. George Dopp are the only living members of the charter board of trustees. She has served forty years.

For several years, the PTA gave it’s lunch money to the library. The community gave plays, recitals, bake sales, donation suppers, movies for its support. The Woman’s Club always supported it regularly and generously, always hoping to have a separate, adequate building to house its collection of books.