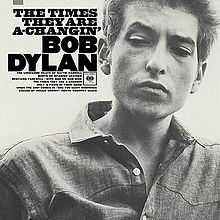 Excerpt: No musician's lyrics are more often cited than Dylan's in court opinions and briefs, say legal experts who have chronicled the artist's influence on today's legal community. From U.S. Supreme Court rulings to law school courses, Dylan's words are used to convey messages about the law and courts gone astray.

His signature protest songs, "Blowin' in the Wind" and "The Times They Are a-Changin'," gave voice and vocabulary to the antiwar and civil rights marches. His most powerful ballads, "The Lonesome Death of Hattie Carroll" and "Hurricane," have become models for legal storytelling and using music to make a point.

Dylan's music and values have imprinted themselves on the justice system because his songs were the score playing during the formative years of the judges and lawyers now populating the nation's courthouses, colleges and blue-chip law firms, says Michael Perlin, a New York Law School professor who has used Dylan lyrics as titles for at least 50 published law journal articles.