"Blood Money", Library Meeting Room Use, and Charges of Censorship 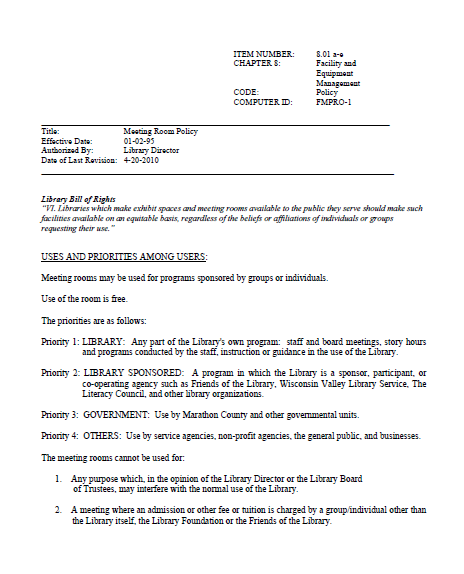 Excerpt: The movie "Blood Money" will be shown at 10 a.m. April 2 at the Cosmo Theatre in Merrill and at 1:30 p.m. April 3 at the Marathon County Public Library, third floor.

"Blood Money" is a documentary film about the abortion issue narrated by Alveda King, niece of Martin Luther King Jr.

Excerpt: A local anti-abortion group is accusing a Marathon County Public Library official of censorship for canceling the showing of a controversial abortion film at the downtown Wausau library.

Attorneys for 40 Days for Life’s Wausau chapter said in a letter addressed to county officials that library Director Ralph Illick blocked the event, citing the potential for counter-protests.

Illick declined comment this afternoon and said that he could not discuss “a legal matter.” Maratjavascript:void(0)hon County Corporation Counsel Scott Corbett said officials plan to respond to the complaint in a letter tomorrow but did not know what that message would include.

Excerpt:      Janet Nichols, a member of the group, said library employees didn't ask questions about the topic of the film when the event was planned. She said Illick told organizers that he had seen plans for counter-protests on Facebook and felt allowing the showing would disrupt the library.

Corbett confirmed that Illick was the official who canceled the showing because a public disturbance would impair library operations.

The library's meeting room policy makes space available to all groups "on an equitable basis, regardless of the beliefs or affiliations of individuals or groups." But the policy also allows the library director to refuse use for any purpose that "may interfere with the normal use of the library."

Sources tell me that Scott Corbett, Marathon County Corporation Counsel, negotiated a venue change to another county building near the library.