Taking Stock of the Major Players in the Movie Rental Business

Blockbuster.  Netflix.  Redbox.
For those of you who like this kinda stuff. 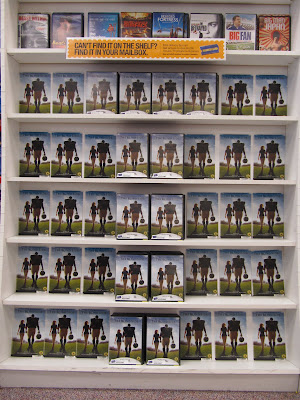 Link to informative overview by Maria Halkias in the May 8 Dallas Morning News, "Blockbuster is trying to turn it around".  (Blockbuster's headquarters is in Dallas.)


Blockbuster turns 25 in October. It's still the largest renter of movies.

It won the brick-and-mortar battle well before its largest store competitor, Movie Gallery Inc., filed for bankruptcy in February for the second time. Movie Gallery is closing its remaining 2,414 stores, which include Hollywood Video outlets.

As in the 1990s, when Blockbuster won revenue-sharing agreements from the big movie studios, the chain remains a critical link to consumers for Hollywood.

Blockbuster struck deals this year with three studios – Fox, Sony and Warner Bros. – for exclusive rights to rent new-release DVDs for the first 28 days. For studios, it preserves the higher price that box office hits traditionally fetch when they initially move to DVD. That had been threatened by Redbox's $1-a-day rental kiosks.

For Blockbuster, it's a competitive advantage over Netflix and Redbox, becoming the exclusive source of new-release DVD rentals. New releases account for up to 80 percent of Blockbuster's revenue.

Blockbuster still has 25 million customers who come through its 4,000 U.S. doors at least once a month, preferring to browse the shelves when they have time for a movie.

But last year's $6.7 billion rental market is way below its 2002 peak of $8.3 billion, and stores now share more than half that revenue with kiosks and by-mail rentals.
Posted by Retiring Guy at 10:11 AM