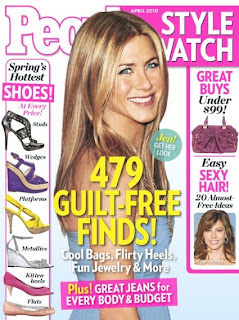 Excerpt:   People StyleWatch, a magazine that covers trends, is riding the crest of several of them. Cheap, disposable fashion has helped it: Topshop and H&M pump out stylish, low-cost items meant to be worn for a season, then thrown away. Those mass-market clothes are the basis of StyleWatch’s coverage.

Where Vogue presents itself as an elite insider in the fashion world, StyleWatch throws open the doors. It defangs intimidating trends (“Would you wear ... super-slouchy harem pants?”), running pages of under-$100 clothes, and reassuringly shows celebrities wearing the same item over and over. “It’s about being inclusive,” said Susan Kaufman, StyleWatch’s editor.
Posted by Retiring Guy at 6:58 AM

If only serials and magazines had modern response times (not a three month wait like some) on subscriptions serials controls were easier to do.