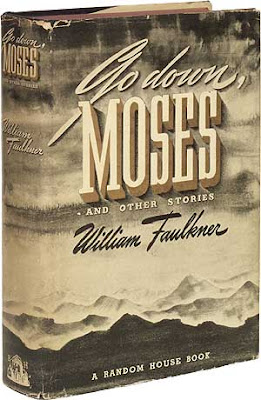 Excerpt: The climactic moment in William Faulkner’s 1942 novel “Go Down, Moses” comes when Isaac McCaslin finally decides to open his grandfather’s leather farm ledgers with their “scarred and cracked backs” and “yellowed pages scrawled in fading ink” — proof of his family’s slave-owning past. Now, what appears to be the document on which Faulkner modeled that ledger as well as the source for myriad names, incidents and details that populate his fictionalized Yoknapatawpha County has been discovered.

The original manuscript, a diary from the mid-1800s, was written by Francis Terry Leak, a wealthy plantation owner in Mississippi whose great-grandson Edgar Wiggin Francisco Jr. was a friend of Faulkner’s since childhood. Mr. Francisco’s son, Edgar Wiggin Francisco III, now 79, recalls the writer’s frequent visits to the family homestead in Holly Springs, Miss., throughout the 1930s, saying Faulkner was fascinated with the diary’s several volumes. Mr. Francisco said he saw them in Faulker’s hands and remembers that he “was always taking copious notes.”

Specialists have been stunned and intrigued not only by this peephole into Faulkner’s working process, but also by material that may have inspired this Nobel-prize-winning author, considered by many to be one of the greatest American novelists of the 20th century.

Key player in this story: Sally Wolff-King, scholar of Southern Literature at Emory University. It was she who made the connection between Faulker's books and Leak's diary. She previewed her findings in the fall 2009 issue of The Southern Literary Journal. Her book, Ledgers of History: William Faulkner, an Almost Forgotten Friendship, and an Antebellum Diary" will be published by LSU Press in June.
Posted by Retiring Guy at 8:46 AM