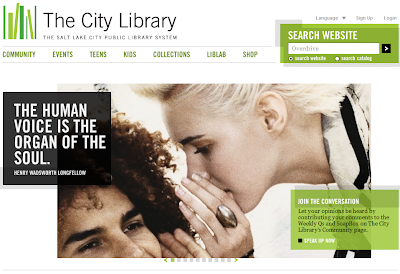 Excerpt: Wobbled by months of management controversy — including calls for the director’s resignation and a board member departure — the Salt Lake City Public Library has teed up an ambitious transparency initiative that includes the quick release of draft minutes and perhaps televised board meetings.  [Transparency?  I can't access the Board of Directors page.]

The certain-to-pass measure, unveiled Thursday and slated for a formal vote in one month, is intended to mend the award-winning library’s wounded reputation.

But it did little to quell the still-raging tempest. During the testy three-hour meeting, one employee chastened the board for recently renewing the library boss’ contract, accusing Director Beth Elder of putting a “happy, disingenuous” face on the unrest. A decade-long volunteer scolded the board for not being accessible to the public, then called for the board president’s ouster. A group of residents advocating an alternative location for a new Marmalade branch stormed out, declaring “the fix is in.”

And after, board member Luana Chilelli — in the role less than three months — told The Tribune she is quitting. “I’m very uncomfortable with them,” Chilelli said, riding the elevator down from the fifth floor boardroom. “There’s some real issues that need to be addressed, and they’re dismissive. I’m very disappointed, and I’m very sad.”