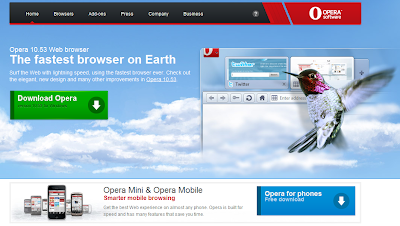 Opera Software
Link to June 6 San Jose Mercury News article, "Little known Norwegian browser challenges the big boys".
Excerpt:  No. 1 in Kazakhstan, Uzbekistan and Belarus. It might not be a slogan to attract an avalanche of American Internet users, but the Norwegian company that makes the fastest Web browser you've never heard of sees a major opportunity in the United States and the rest of the world.

Since the Internet went mainstream in the 1990s, accessing the Web has been an either-or decision, if there were any choice at all — Netscape or Microsoft's Internet Explorer? Or more recently — IE or Firefox? But the popularity of the Mozilla Foundation's Firefox and the rapid rise of Google Chrome have broken that logjam. With Internet Explorer on track to abdicate its long-held position as the browser used by a majority of the world's desktop users, browsers are experiencing their most intense cycle of innovation since Microsoft vanquished Netscape in the 1990s, innovation that is giving users a faster and more powerful window to the Web.


Retiring Guy has major issues with Google Chrome's "hang time" and is willing to give Opera a try.  Just toe-dipping time right now but already like the layout.
Posted by Retiring Guy at 3:34 PM