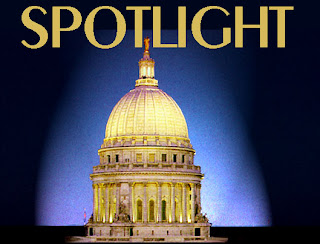 Excerpt: A bill under consideration in the committee would remove Oehlhof's court record and more than four million others from the court database. Under the proposal, pending cases would be blocked from public viewing, as would cases that were dismissed, resulted in a not-guilty verdict, or were settled out of court. Only court and law enforcement officials, attorneys and accredited media would have access to the entire database. The bill would also levy a $10 annual fee on users, and create an account to track who uses the system and what they use it for. The author of the bill, state Rep. Marlin Schneider, D-Wisconsin Rapids, says the tracking system would provide a way for the courts to determine whether anyone is using the system to illegally discriminate against job applicants and prospective tenants. But others say it smacks of big-brotherism, an attempt to monitor those who are monitoring the government.
Posted by Retiring Guy at 10:19 AM