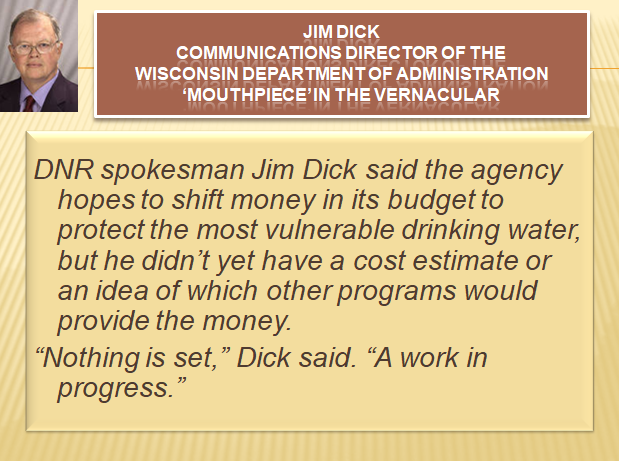 Reported in Failure and a call for patience amid rising farm pollution of state waters.  (Wisconsin State Journal, 4/7/2018) 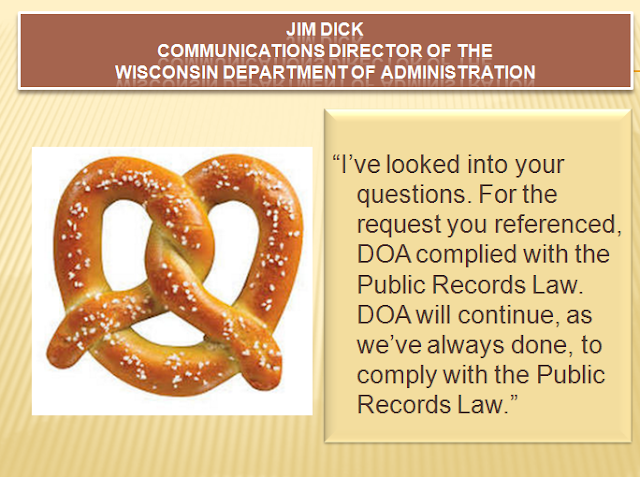 The Public Records Law itself provides penalties if a public official destroys a record after it has been requested, but it remains unclear if or when the DOA text messages were destroyed. Administration spokesman Jim Dick this week declined to provide answers about what happened to the texts the newspaper requested.


Related posts:
Meet the members of the Wisconsin Public Records Board.  (11/11/2015)
Dear Beth, Journalists have a sacred oath to respond to this betrayal of the public trust by Scott Walker.  (12/11/2015)
Danger, Will Robinson! Scott Walker talks about openness, access, and transparency.  (12/8/2015)
Open records and Scott Walker's concerns with constituents' privacy.  (7/5/2015)
Scott Walker does David Bowie.  (7/4/2015)
Open records and Scott Walker's irresolute response.  (7/4/2015)
When it comes to transparency, ALEC wants to have it both ways.  (7/4/2015)
You have to wonder what dictionary Joint Finance co-chair John Nygren is working from.  (7/3/2015)
Assembly Speaker Robin Vos's definition of transparency: All the self-serving Republican news releases I see fit to print
Good question, Albert Darling. So why the lack of transparency in Wisconsin? (7/3/2015)
Posted by Retiring Guy at 3:05 PM