Catching Up with the Evanston Public Library 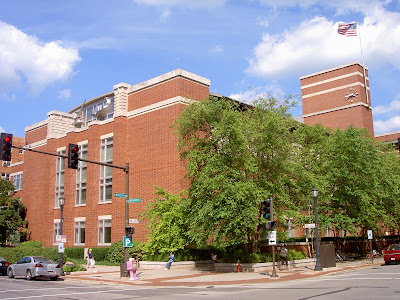 Friends group members expressed their anger by leaving the downtown library's community room as the board finished its 5-3 vote Sept. 15 in support of the proposal by member Diane Allen-Jacobi.

The zero tax increase, except for salary and benefit adjustments, makes no sense in light of the board's recent decision to take control of the library system budget by switching to a Library Fund model.

Excerpt: The Evanston Public Library Board is examining ways to cut enough discretionary spending from the next budget to keep the branch libraries open through December 2011, when the board will assume control over its property tax levy.

Library administrators Wednesday presented the board with an outline that would keep overall spending within a guideline adopted by the board Sept. 15. Cognizant of the city of Evanston's dire fiscal circumstances, the Library Board adopted a budget guideline that would limit any increase in the tax levy to “increases in personnel costs related to salaries and benefits, including those provided for under union agreements.” Personnel costs alone will require an increase of about 9 percent in the library budget.

The 5-3 vote to limit budget increases to those linked to rising personnel costs prompted a walkout Sept. 15 by some Evanston Public Library Friends, who believed the move would negate months of fund raising and outreach that allowed them to raise about $200,000 to keep neighborhood services in Evanston.