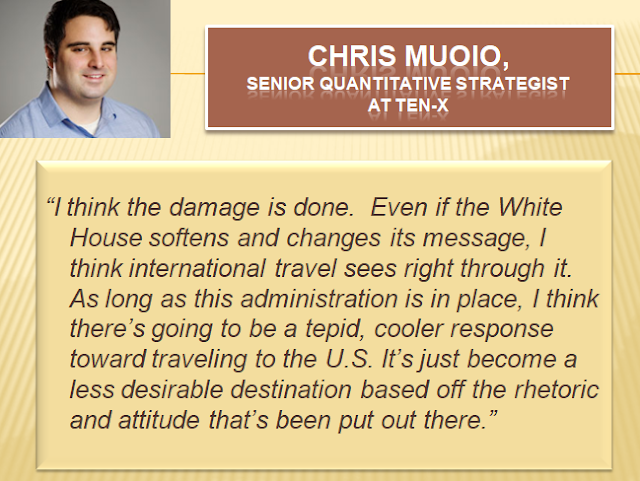 
The U.S.’s total market share of long-haul travel fell to 11.9 percent last year, down from 12.9 percent in 2016 and from 13.6 percent in 2015, according to the U.S. Travel Association. The U.S. was joined only by Turkey—a country currently in political turmoil, having faced a military coup on July 15, 2016—as the only two countries out of the world’s top 12 destinations to have seen a significant drop in inbound international travel over the last two years—Turkey (6.7 percent) and the U.S. (6 percent). In comparison, Saudi Arabia saw its arrivals climb 20.3 percent from 2015 to 2017.  [emphasis added] 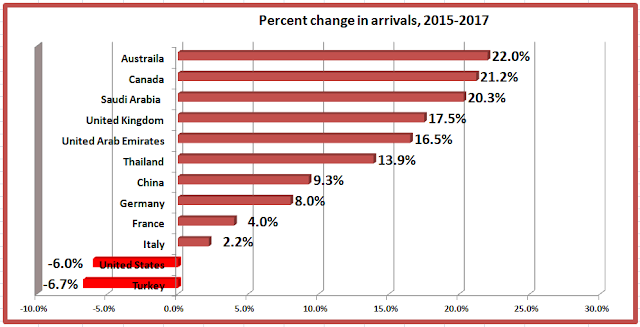 
As more international travelers decide to skip the United States, 10 business associations, including the U.S. Chamber of Commerce and the National Restaurant Association, have created a travel industry group aimed at reversing the growing unpopularity of the U.S. as a vacation destination.

Other 'shithole countries' posts:
That is to say, Donald Trump purposefully injects 'crude, dehumanizing, and racist language' into the political discourse on immigration.  (1/15/2018)
Donald Trump: (a) Nativist, (b) racist, (c) ignoramus, (d) all of the preceding.  (1/14/2018)
Jeff Sessions's unqualified praise for first draft of official ideology of Nazi Germany.  (1/14/2018)
As you might expect, Trump likes the orange countries of the world.  (1/13/2018)