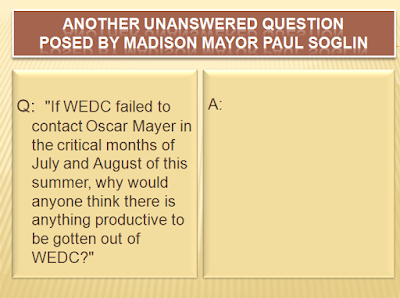 Soglin as quoted in Scott Walker reaching out to Kraft Heinz as loss of jobs is lamented.   (Milwaukee Journal Sentinel, 11/5/2015) 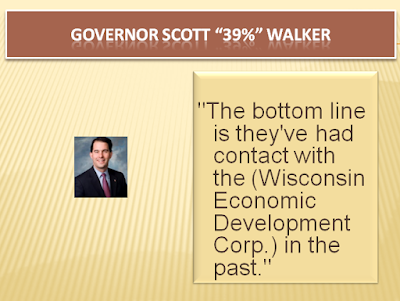 Well, yes and no.  Yes, there was contact, but no, not with Kraft Heinz.


WEDC, the state's jobs agency, in 2013 offered what was then Kraft Foods Group $194,800 in tax credits to attempt to win a $4 million investment in Oscar Mayer's Madison offices, agency spokesman Steve Michels said. In April 2014, Kraft Foods declined the tax credits, said Michels, who didn't answer questions about whether WEDC had contacted the newly created Kraft Heinz to see if the new ownership changed matters.


Six weeks ago, the top 3 on this list of Governor Scott Walker's appointments were notified that the Madison Oscar Mayer plant would be closing as a result of the Kraft Heinz merger.  The news was summarily dismissed.