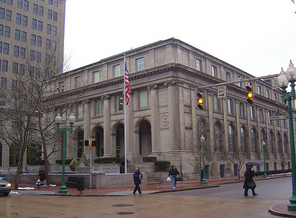 Excerpt: Late last month the library was notified that it had failed to comply with a state Library Commission policy that regulates expenditure levels over time: last fiscal year, the library failed to spend more than, or the same amount as, the average of the amount they had in the three prior years.

That's because the library sharply cut expenditures this year, after their fiscal situation was left uncertain by a state Supreme Court ruling that found the decades-old law that forced the school system to fund the library was unconstitutional.

That left the library system scrambling to right its finances, looking to come up with nearly $3.8 million, 40 percent of its operating budget.

"The Kanawha County Public Library has never considered privatizing," he said. "At this point the library does contract out various aspects of our operations where it's beneficial to do so ... and we provide very efficient and cost-effective service."

Library can no longer carry the load.  The cancellation of the festival is caused by the loss of significant funding to Kanawha County Public Library for the 2013-2014 fiscal year. The library provided the bulk of the staffing and organizational support for the festival.

Blame it on the 1950s:   A 1957 state law dictates that nine school systems in West Virginia must turn over a portion of their budget to help fund public libraries in their counties. In Kanawha County, that would amount to a payout of nearly $3 million in the current fiscal year.

That relationship has been the subject of a legal battle between the two organizations. In 2003, school officials sued the West Virginia Department of Education to recover money they were forced to spend on libraries, arguing that the law requiring them to do so was unreasonable, and that they should receive a couple of million dollars more in state aid each year because of the requirement.

And even before this year.  This modern classic has yet to leave the drawing board.