An influence?  Maybe yes, maybe no.


Laura Nyro was hugely popular on the UB campus in the late 60s and early 70s.   Performing at Buffalo's Kleinhan's Music Hall in March 1970, she had a sold-out, mostly student crowd in the palm of her hands.  It remains one of my most memorable live-music experiences.

But I think Billy might have been in a different place and time.

Piled high and deep.     Having witnessed a show a few years later in which she nearly set fire to Buffalo, N.Y.’s venerable Kleinhans Music Hall by leaving a lit cigarette dangling from the edge of the Philharmonic Orchestra’s grand piano while she wandered around the stage between songs murmuring to herself, I can personally attest to the often bizarre vibes Nyro could engender in even the most sympathetic of audiences.

OK, Billy, so maybe Laura Nyro made a second appearance at Kleinhan's.  I'll cut you some slack.

Otherwise, there can be only one explanation.

As for the concert I attended.

A few songs into the first set, Nyro lit up a cigarette, placed it on the edge of the piano, and explained that the management had given her permission to smoke.  At the time, I figured, "Yeah, right.  She's setting her own rules here".  Kleinhan's had the reputation of being a veddy, veddy proper concert venue, although two years after Nyro's concert, I witnessed the odd musical coupling of J. Geils and Yes on the same stage.)

Perhaps not in the mood for wandering around the stage, Laura remained seated at the piano during both of her sets.  And although her between-songs patter occasionally tended towards the stream-of-consciousness, I can report that she never murmured to herself.

No bizarre vibe.  Nobody had to call the fire department.

Geezer alert.  Now I'm trying to remember where the inspiration for this rambling post came from. 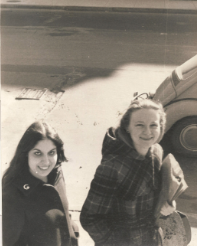