Rep. Ziegelbauer is Looking for Co-Sponsors for Bill to Repeal Emergency Services MOE 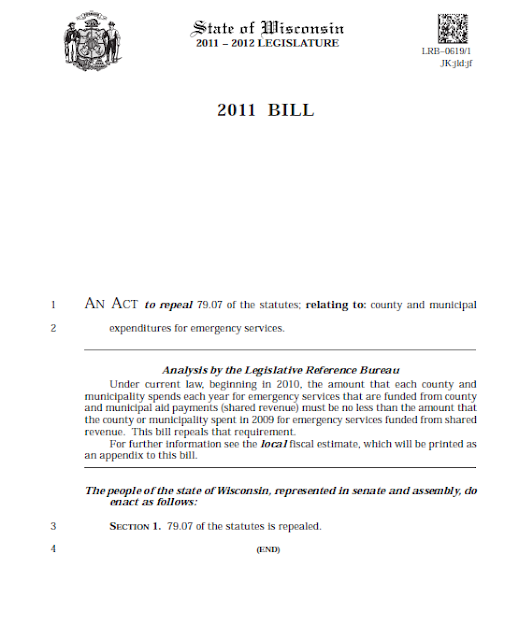 As of 2010, municipalities each year must spend for emergency services funded from shared revenue payments, no less than the amount they spent in 2009, not counting capital expenditures and one-time expenses.

If a municipality fails to comply with the maintenance of effort requirement, DOR can reduce its shared revenue payment as a penalty. LRB-0619 is a redraft of Rep. Gottlieb’s 2009 AB 661, and will repeal this mandate which was passed as part of the 2009-11 State Budget (Act 28).

This is a decision that local government officials can make better on their own without interference from Madison. It's a clear example of an unnecessary, unfunded mandate which should be repealed. The State Legislature should provide local governments with more flexibility, not less, in how they deliver public services.

Please note that any action to repeal the library maintenance of effort as an element of public library system membership will require separate legislation.

Link to the Wisconsin Library Association's position paper on maintenance of effort, "A Fair Share and a Choice".
Posted by Retiring Guy at 2:35 PM