How telling: Scott Walker has to depend on out-of-state donors to pay off his Presidential campaign debt 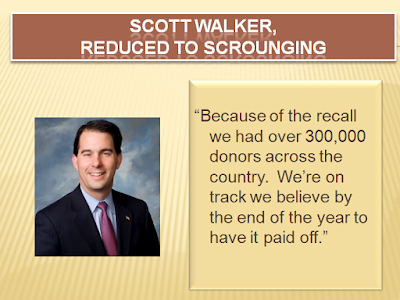 As quoted in Presidential campaign on track to repay debt this year.  (Madison.com, 2/4/2016)

Wisconsinites, apparently, are keeping a tight grip on their wallets when it comes to their Governor.


A campaign finance report filed Monday by the governor’s state campaign committee, Friends of Scott Walker, showed the committee raised a total of nearly $5.6 million from individuals between January and June 2015. Nearly $4.8 million, or 87 percent, of his individual contributions came from outside Wisconsin.