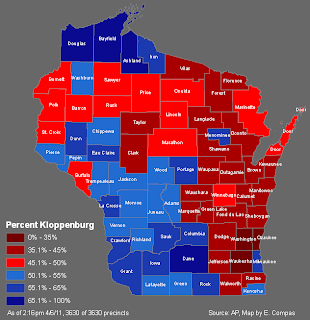 A Divided State
Walker says he should have prepared public earlier for his sweeping changes. (Milwaukee Journal-Sentinel, 6/27/2011)

Still being fed his lines.

While acknowledging that he should have done more work on the front end, the governor did say he gave plenty of warning during his campaign for governor last year - and even before then - that should have signaled he would take action to limit collective bargaining.

In other words, we should have been able to read his mind last fall.

The  honest, logical response: "Yes, I should have campaigned on eliminating collective bargaining for most public employees."
Posted by Retiring Guy at 6:29 AM