Thoughts Worth Sharing from Larry Martin 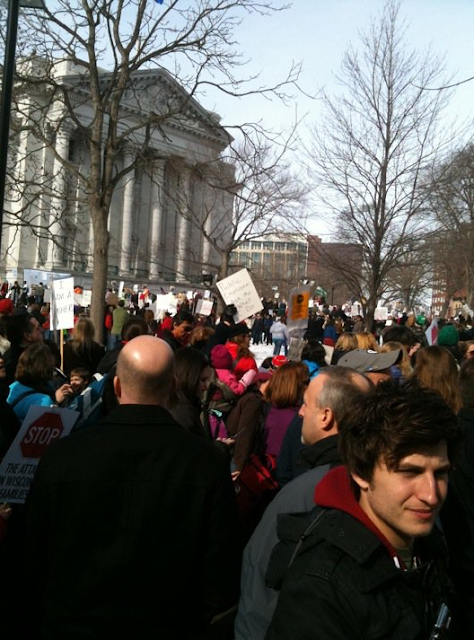 An incredibly sad situation is evolving here in Wisconsin. For those of you who are out of state and may not have heard, Wisconsin Governor Scott Walker and the Republican majorities in our state legislature are literally on the verge of eliminating one of the most fundamental rights of a free and democratic society – the right of workers to join together in a union to collectively bargain for their compensation and workplace issues.

Our family, and thousands of others in our state and nation gave their sweat, labor and yes, even their lives over our history to secure the right of a free people to collectively organize themselves for the right to negotiate their wages, benefits and work place situations. Thanks to the labor movement all of us have benefited from the establishment of the 40 hour work week, higher wages, a growing middle class, better health care and safer work environments. Today, thanks to Governor Walker, this fundamental right is under direct attack and make no mistake – it will affect us all.

This issue at hand is not whether labor unions should negotiate or make concessions during tough economic times. The issue is whether people have the basic human right to collectively bargain for their wages and work conditions. According to the Governor – the answer is a resounding no.

My Grandfather – Eugenio Fumo was fired in the 1930’s during the depths of the Great Depression for trying to organize his colleagues into a union. My Mother was a strike leader in the 1970’s for her school when public school teachers were fighting to lift their pitiful wages into family supporting careers. As a student in the early 1980’s I remember everyone in our country – Democrats, Republicans and Independents all supporting in solidarity the brave men and women of Gdansk Poland who stood up to the Communist Dictatorship for their fundamental right to organize and collectively bargain. The movement literally was the spark that lead to the end of communism in Europe.

There is no doubt that our state and nation face tough economic times that will require all of us to continue to join together in sacrifice. But the way to achieve the results needed is through leadership that brings all of us to the table, a process that involves mutual respect and good faith negotiation.

Make no mistake about this – what is happening here in Wisconsin is not about balancing budgets – it is about using the economic crises as a means to eliminate the fundamental right of workers in a free and democratic society to collectively bargain for their rights, wages, benefits and working conditions.

As horrible as the situation is, something happened today that makes Martha and I deeply proud of our son Samuel, his classmates and the community in which we live.

For the third day in a row, citizens from all walks of life and from throughout our great state descended on the State Capitol to raise their collective voices in support of the rights of workers. Madison’s public teachers called in “sick” today, effectively shutting down the public schools. Every one of them seemed to have shown up to join the rally at the Capitol. Given the schools were shut down, I let Samuel sleep in this morning. I figured he’d celebrate and relax for what was essentially a “snow day”. Instead, Samuel got up and immediately asked me to take him and a friend to school. He was going to meet up with a few friends and head down to support his teachers at the Capitol. Wow, my son the activist? When there is X-box waiting to be played? Being the good Dad, I dutifully drove him and a friend over to school. What I encountered next was overwhelming and emotional.

Samuel’s “few friends” turned out to be over 2,000 students who gathered on their school’s front steps in support of their teachers’ rights to collectively bargain. No adults, no police, no professional organizers. Just some kids who know how to Facebook and twitter. A young man was speaking from a bullhorn. Calmly and respectfully instructing everyone what their plans were and how to act and express themselves in a civil and respectful way. Then, all 2,000 students walked the 3 miles down to the Capitol. So much for young people not caring or being disengaged.

Martha and I watched with great pride as our son Samuel and his friends marched up State Street to join the rally. There they were met by what some estimate (although not the Walker Administration!) as over 30,000 citizens. The entire downtown roared with their arrival. Martha and I saw lots of union folks – teachers, cops, fire fighters, construction workers, professors. But we also saw a lot of folks from all over the state who were not union members – lawyers, business people, small business owners, clerks, professionals. By the way, tons of families too. In short, a cross-section of Wisconsin. Standing together and speaking with one voice. My grandfather would be proud and I know that my mom is of Samuel. I can’t think of a better learning lesson for the day.

You don’t have to agree with unions or even like them. But I hope you will join our family in support of the right of all people in a free and democratic society to join together in an effort to improve their lives and that of their families and communities.

PLEASE JOIN US IN RAISING YOUR VOICES IN SUPPORT. If you are here in Wisconsin – call Governor Walker (608-266-1212) and express your opinion. Call your legislators too! If you are out of state, encourage family back home to stand up in support of this fundamental right.

This is not just an attack on union workers, but on all of us. Join with us, and thousands of Wisconsinites, including the Green Bay Packers and the Wisconsin Catholic Bishops who publicly announced their support today of the fundamental right of workers to collectively organize. If you have ever had an ounce of activism, now is your time!

Larry Martin
Posted by Retiring Guy at 6:29 AM