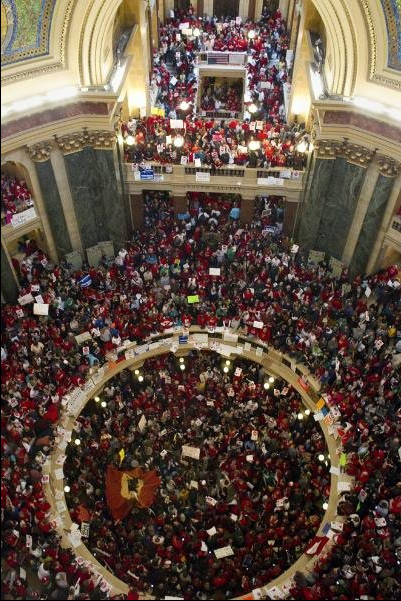 Excerpt:   The problem with Gov. Scott Walker's state budget repair bill isn't what it ends, but what it begins. If it ended at simply requiring public employees in Wisconsin to pay a higher share of health insurance and pension costs, it would be a tough, but reasonable and appropriate response to a projected $3.6 billion budget deficit.

Truth be told, the bill is the beginning of an effort to roll back the right of workers. Its lesser-known provisions set a dangerous precedent for granting the executive branch broad emergency powers where an emergency does not exist. The speed in which the bill is heading from proposal to adoption is also of concern. It is slated for a vote Thursday, just six days after it was released to the public. The fact that a national special interest group, The Club for Growth* [follow the ideologues and sign up for their email alerts], began broadcasting ads in support of the proposal at the same time the bill was released shows that this is not a homegrown effort to fix Wisconsin's problems, but an orchestrated, ideologically driven campaign.

*Brought to you by the Koch Brothers.
Posted by Retiring Guy at 7:52 PM