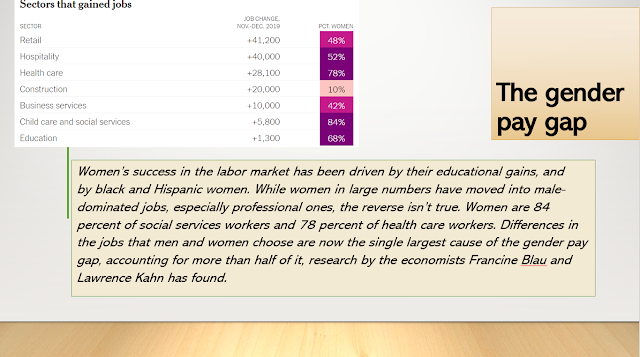 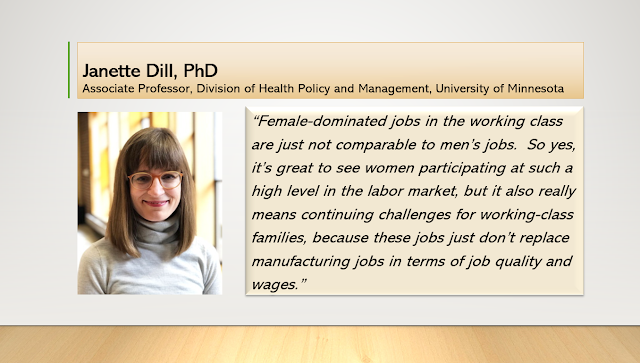 
In a recent analysis, we found that 53 million workers ages 18 to 64—or 44% of all workers—earn barely enough to live on. Their median earnings are $10.22 per hour, and about $18,000 per year. These low-wage workers are concentrated in a relatively small number of occupations, incuding 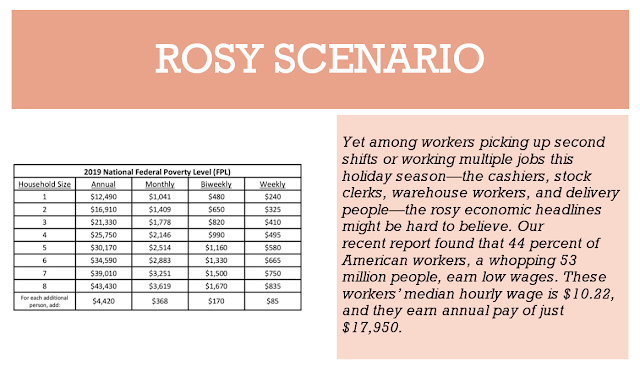 Reported in The economy is growing and leaving low-wage workers behind.  (Brookings, 12/19/2019)

The Uneven Economic Recovery Is Cementing Financial Anxiety for Millions of Consumers.  (Gartner, 7/16/2019)


Unemployment may be at a historically low 3.7%,2 but “underemployment” — the percentage of individuals who would prefer to be working more hours or in a position that more fully utilizes their skill set — is perhaps a better measure of health for the modern labor market.3 Thirty-three percent of college graduates and 40% of recent college graduates are considered underemployed — a rate that remains unchanged since before the Great Recession. Consumers recognize this discrepancy. 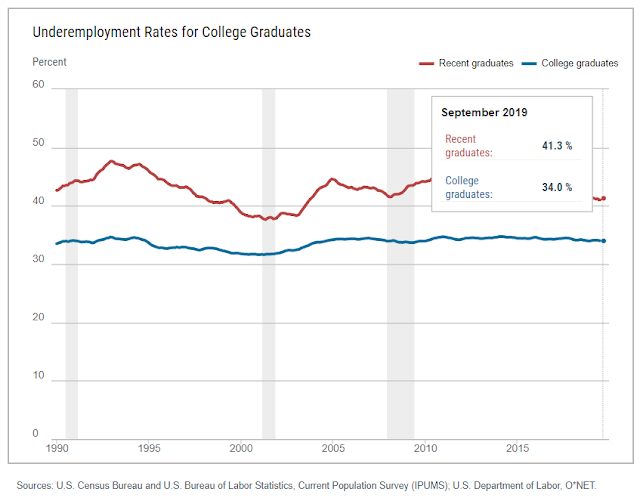 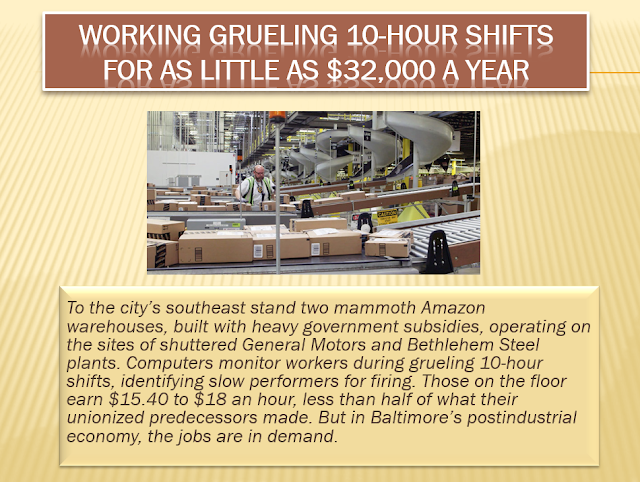 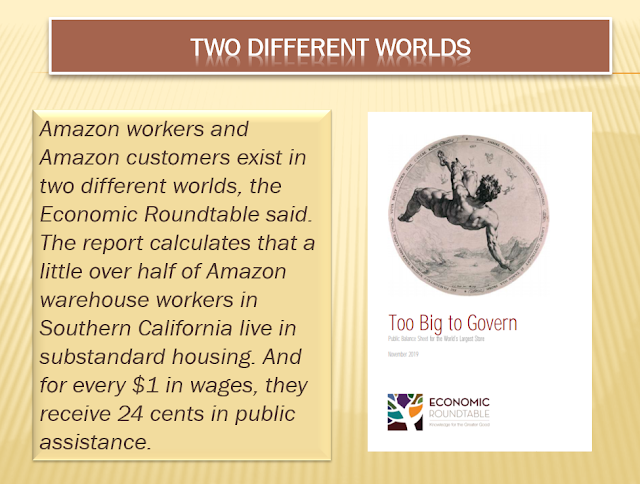 Too Big to Govern

Reported in Activists Build a Grass-Roots Alliance Against Amazon.  (The New York Times, 11/25/2019)

Let's see how that stacks up. 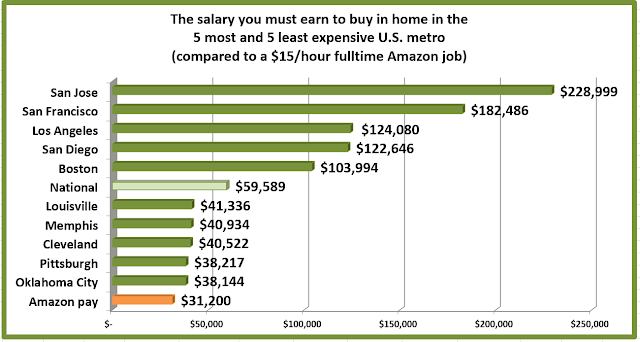 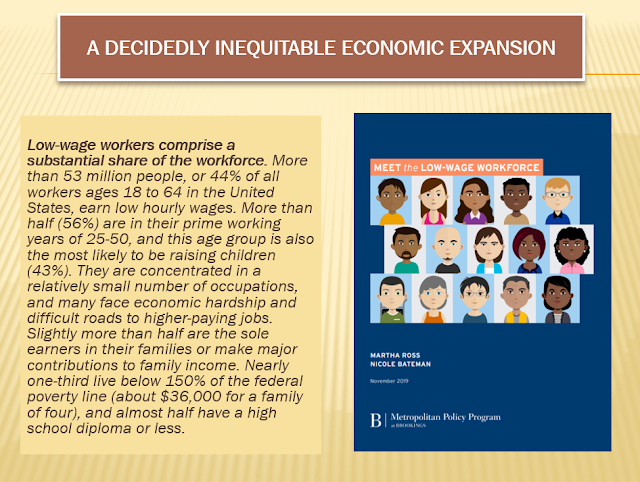 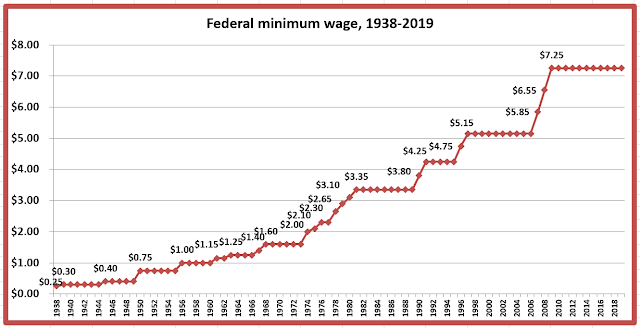 
By keeping the focus on specific industries and occupations, organizers have largely been able to bypass the partisan divide over the national minimum wage, which has been frozen at $7.25 for a decade. The House has passed legislation that would raise the minimum wage to $15 an hour, but the bill has no chance in the Republican-controlled Senate.

The push for sector-specific minimum wages comes amid a broader debate about inequality, and a sense that the fruits of the decade-long recovery have largely gone to highly educated Americans while most workers have had to make do with modest gains. It also seeks to build on the momentum from successful efforts for state and local minimum-wage increases in places like Seattle, New York State and California. [emphasis added] 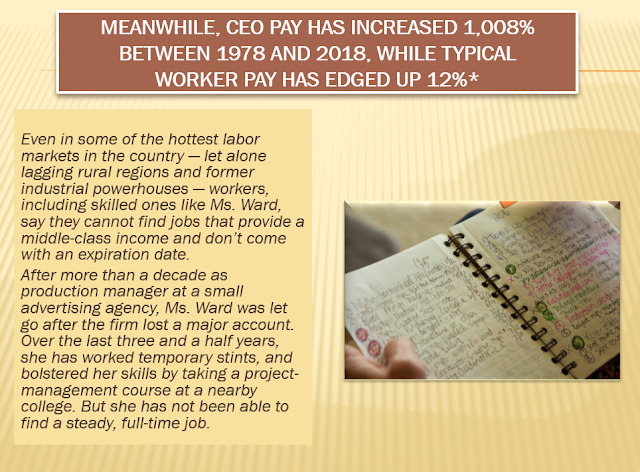 
In other words, we're just fooling ourselves. Most of these people do not show up in the stunningly low official unemployment rate, which was 3.6 percent in October. Working even one hour during the week when the Labor Department does its employment survey keeps you out of the jobless category.  [emphasis added] 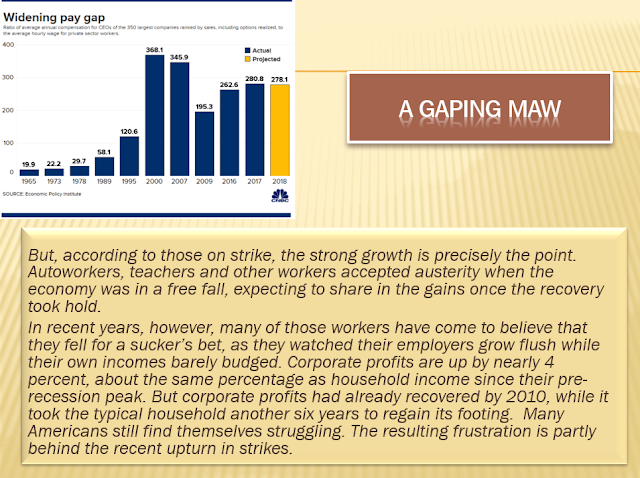 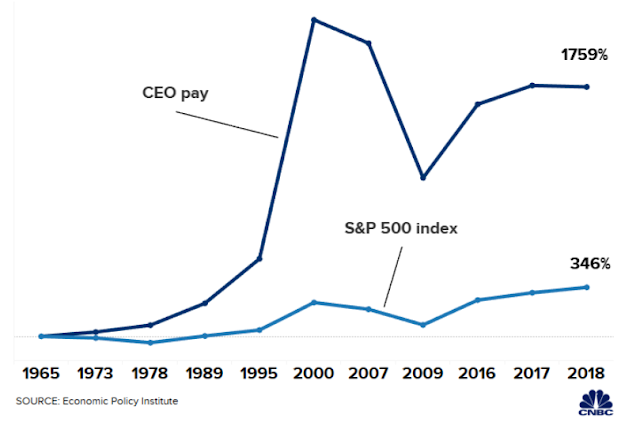 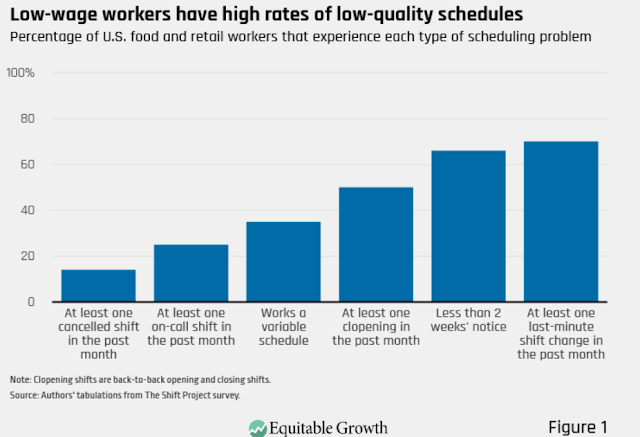 
Unpredictable schedules can be brutal for hourly workers, upending their lives. New research shows that African-Americans, Hispanics and other minorities — particularly women — are much more likely to be assigned irregular schedules, and that the harmful repercussions are felt not just by the workers but also their families.\

The findings come from continuing surveys of 30,000 hourly workers by the Shift Project at the University of California. The researchers compared workers who earned the same wages, including at the same employers, but had different degrees of predictability in their schedules. Those with irregular hours fared worse — and so did their children. 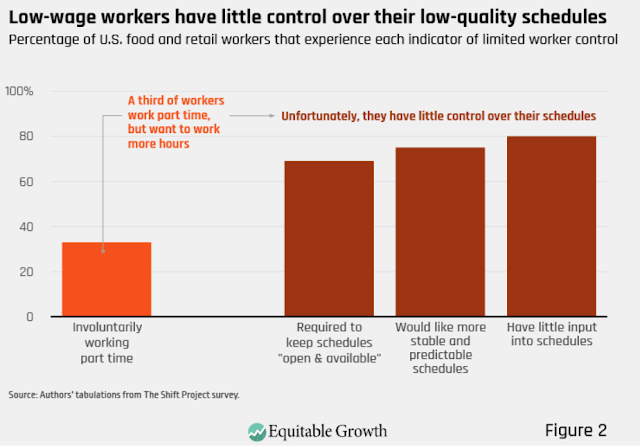 
In Still falling short on hours and pay: Part-time work becoming new normal, Golden shows that the number of people working involuntarily part time has increased 44.6 percent since 2007. While many areas of the labor market have recovered from the recession, the chronically higher level of involuntary part-time workers is evidence of an incomplete recovery.