Dane County accounts for 47% of the Wisconsin's estimated population growth since the 2010 federal census. 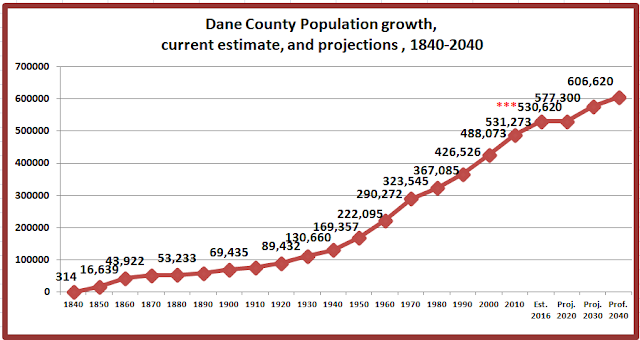 
It's likely that a lot of that money will end up in Illinois.  On the day the gates open at the Foxconn facility, thousands of employees will start earning paychecks for jobs that don’t exist today. That money, for the most part goes back into the economy — one way or the other. In addition to paying mortgages and car payments, even groceries and gasoline, some of that money will also go into savings and investments — the fuel that ultimately drives our economy.


All of Wisconsin is not booming.  And in the northern and western parts of the state, Foxconn won't make a bit of difference.
Population down in 35 Wisconsin counties.  (Green Bay Press Gazette, 3/27/2015)
Wisconsin population trends show urban areas growing, rural areas shrinking.  (Capital Times, 3/26/2016)
Rural Wisconsin counties continue to lose population.  (WisContext, 6/28/2016)
Posted by Retiring Guy at 9:17 AM