Dear Betty and Dick Odgaard, I don't think you have cast a wide enough net 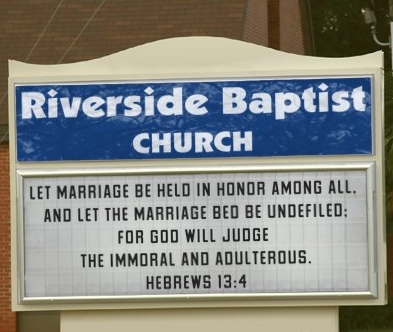 On the Facebook page for their ministry, God's Original Design Ministry, the Odgaard's say they plan to erect 1,000 billboards advertising their belief in upholding "traditional" marriage between one man and one woman.

The first billboard, a 14-foot by 48-foot black-and-white sign, went up outside of Durant, Okla., in late July. On Facebook, the group said the billboard was "funded 100 percent by your generous donations."

Whoops!  I think the Odgaards need to find a new God.

The Odgaards recently closed the Gortz Haus after their refusal to host gay weddings and then a decision to get out of the wedding business altogether.

I suspect that they never asked couples if they'd had premarital relations.