Armed robbery at Jim's Amoco in Middleton, but suspect quickly apprehended, thanks to modern technology 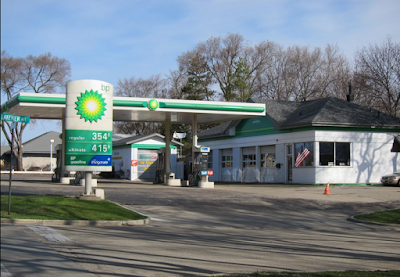 This video will give you an idea of how the Middleton Police Department located the perp.  The unmanned aerial vehicle takes off at 1:53.  In today's case, though, I'm sure there was no "waving back to the camera".  (2:31)

As reported at 5:19 p.m. today via a media releases on wi-middleton.civicplus.com.

On Sunday May 31, 2015 at 1:50pm, officers responded to a report of a Robbery that had just occurred at the BP Gas station located at 6504 University Ave.  The clerk was able to give a description of the suspect and the suspect’s vehicle.  Officers responding to the scene observed the vehicle and a pursuit ensued.  The suspect crashed the vehicle into a parked car on Voss Parkway and took off on foot.  With the help of the Middleton Fire Department and the use of their Search and Rescue Drone, officers were able to take the suspect into custody.


Chief Aaron Harris with the Middleton Fire Department stated the Search and Rescue Drone was acquired through a private donation from a City of Middleton resident.  Sgt. Terry Hanson approved the deployment of the Fire Department’s drone with wireless video and the suspect was found a short time later laying in the cattails in the water by Tiedemann’s Pond.  Chief Harris was able to direct officers to the location of the suspect and the suspect was taken into custody.